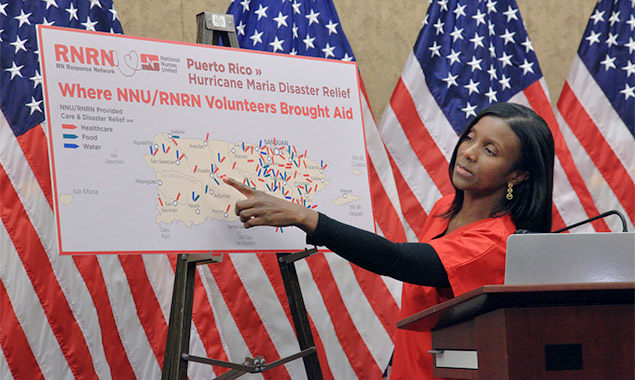 National Nurses United (NNU), the nation’s largest union of registered nurses, further condemned the U.S. government’s slow and inadequate response in Puerto Rico after Hurricane Maria—given the results of a new Harvard study published Tuesday in the New England Journal of Medicine placing the death toll from the storm at 4,645, in extreme excess of the official federal count of 64.

“This new study only confirms what our volunteer nurses on the ground in Puerto Rico saw firsthand: The people of Puerto Rico were left to die by an administration that failed its own American citizens,” said NNU Executive Director Bonnie Castillo, RN, pointing out that the time period of the Harvard study, the first few months post-hurricane, is just a window in a longer-term public health crisis for Puerto Ricans—including a continued loss of skilled workers to the mainland, a growing mental health crisis, and a lingering lack of functioning infrastructure, including an island-wide blackout in April.

NNU’s disaster relief project, the RN Response Network (RNRN), deployed 50 nurses to Puerto Rico in October, 2017, and the RNs returned sounding the alarm on the deadly lack of food, water and shelter they witnessed. NNU/RNRN released a report to Congress on the deadly conditions, and several RNs held a press conference with members Congress in late October and testified to Congress in early November, urging the federal government to take immediate action to prevent further illness and death.

“Nurses on the ground saw that people were dying. Our volunteer RNs came back to the U.S. and said again and again, ‘The people of Puerto Rico are dying. Do something!’ This new study proves that inaction by this administration and inept contractors cost thousands of lives,” said Castillo. “And we can see that even today, over eight months since Hurricane Maria struck, the people of Puerto Rico have not been given the aid they need to fully recover, while we are headed right back into another hurricane season.”

“The RN Response Network has sent volunteer nurses on disaster relief deployments for over a decade, including to areas impacted by hurricanes Katrina, Rita, Sandy and Harvey, and we have never before seen anything like the slow, grossly inadequate response of our federal government in Puerto Rico,” said NNU Vice President and lead nurse for the October deployment, Cathy Kennedy, RN. “It is no surprise to any of our volunteer nurses, who were able to assess firsthand the precariousness of the situation, that according to the Harvard study, the hurricane-Maria-related death count is in the thousands.”

While the federal government claimed, in the aftermath of Hurricane Maria, that everything was going well in Puerto Rico, nurses described a FEMA presence on the island that was sparse at best, even weeks after the hurricane, and many times, ineffective. People were often standing in line for hours in blistering heat waiting for desperately needed water and food, only to finally see federal disaster officials with paperwork “to collect data,” rather than handing out critical supplies.

During the October deployment, nurses reported Puerto Ricans still living in roofless houses with soaked interiors, where dangerous black mold created respiratory distress and illness — and also reported outbreaks of leptospirosis, a deadly bacterial disease. According to the nurses, many Puerto Ricans were drinking untreated water from streams, while nurses moved from municipality to municipality, desperately trying to do public health education on how to disinfect the water.

In late January, the RN Response Network sent a second deployment of nurses to Puerto Rico, in partnership with the International Medical Corps. RNRN volunteers on that deployment still saw closed roads, downed power lines—even months after the storm. Nurses also witnessed negative public health impacts that were now systemic, as corporations used the disaster as an opportunity to capitalize on the privatization of public resources.

According to RNRN volunteers, while organizations like the International Medical Corps and its local partners were stepping up and providing robust healthcare in Puerto Rico, the accessibility to care was eroding due to a longer-term move, on an island that had guaranteed universal healthcare in its constitution, to private health insurance.

“The acute disaster is over, now it’s a manmade disaster,” said volunteer RN Amy Tidd, after returning from the January deployment. “The hurricane has been used as an excuse to take the opportunity to privatize resources and implement austerity policies, just like it did after Katrina in New Orleans.”

RNRN volunteer nurse Maria Rojas, who deployed to Puerto Rico in both October and January, said that while the January volunteer mission gave her the sense that Puerto Ricans have access to the care they need, their coverage for that care was changing.

“The health care corporations that we worked with are on the front lines and they are seeing the changes being implemented: increases in insurance costs, changes in medications and what is being covered and not covered, costs are being cut. They now have to chase down funding sources including grants to do their work,” said Rojas, who worked with MedCentro in Ponce, on the south side of the island during the January deployment.

RNRN volunteer nurses have also criticized FEMA’s awarding of contracts to ill-equipped companies, out to make a profit, at the expense of human lives.

“Nurses look at a humanitarian crisis, and we get to work putting the general public back into a state of health. Banks, corporations and private contractors see that same disaster as an opportunity to make money,” said Kennedy, citing a widely publicized example of Tribute Contracting, LLC, a company with no previous disaster relief experience, which was awarded a FEMA contract for 30 million meals for Puerto Rico. By the time 18.5 million meals were due, Tribute had only delivered 50,000, and the meals—sent to patients with no power—were not self-heating.

“Our volunteer nurses’ weeks of scrambling to find food, water and other supplies for the people of Puerto Rico—were directly connected to the failure of government agencies and contractors who should have been responsible for providing that aid,” said Kennedy.

“This new study, putting the death toll over 4,500 should be a badge of shame on our government and on those who failed to do their job, while looking at Hurricane Maria as an opportunity to make a buck,” said Castillo.

RNRN has been monitoring the situation on the ground in Puerto Rico, sending supplies and speaking out to legislators and in the media, as the 2018 hurricane season rapidly approaches. Nurses say with the recent study backing up their firsthand account of deadly conditions, they will fight to ensure such a grossly inadequate response never happens again.

“This is the era of climate related disasters,” said Castillo. “Storms will only continue to increase in frequency and severity, and nurses know that we must raise our voices loud and hold our elected officials accountable for caring as much as nurses do about the health of everyday people. It’s unacceptable for the richest country on earth to be denying aid to its own citizens.”

Since 2004, RNRN volunteer nurses have cared for thousands of patients during disaster relief and humanitarian assistance deployments that include the South Asian tsunami (2004); Hurricanes Katrina and Rita (2005); the Haiti earthquake (2010); Hurricane Sandy (2012); Super Typhoon Haiyan/Yolanda (2013), the Continuing Promise 2010 and 2015 humanitarian missions with the Department of Defense, and Hurricanes Harvey, Irma and Maria (2017). RNRN volunteers have also provided first aid and basic response services to hundreds of community events across the country, as well as rotating teams who assisted the water protectors in Standing Rock in 2016. RNRN is a project of the California Nurses Foundation (CNF) and powered by NNU, the largest organization of registered nurses in the U.S.