'As Puerto Rico Suffers, Where is our Government?' Nurses Join Congress Members to Urge Action on Healthcare Crisis 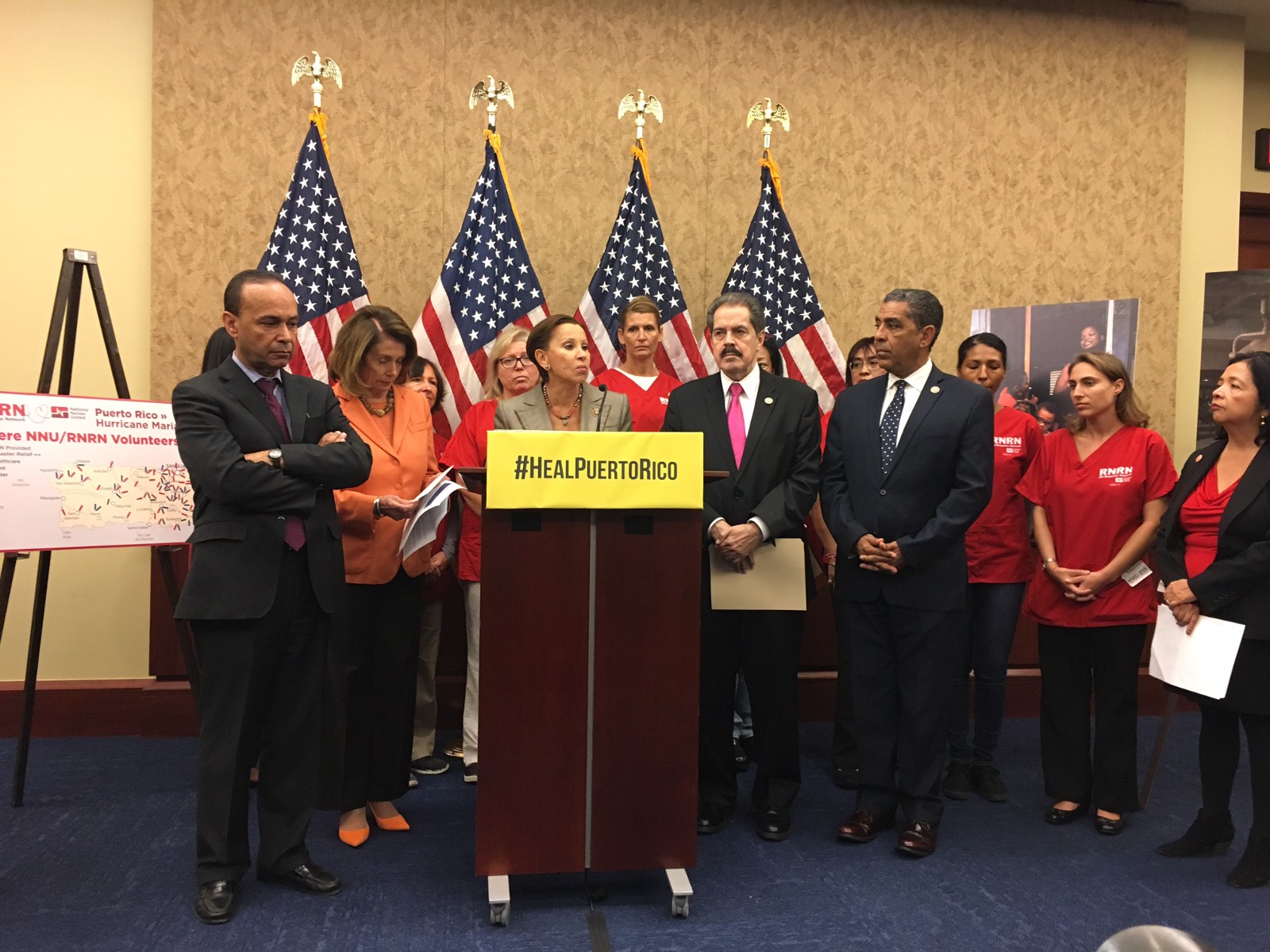 “Doctors performing surgery are having to use cell phones as flashlights.” — Rep. Nydia M. Velázquez (D-NY)

Nurses are duty bound to protect their patients. So when the Registered Nurse Response Network (RNRN) — a disaster relief project of National Nurses United (NNU) — sent 50 volunteer nurses to Puerto Rico, with an AFL-CIO deployment of some 300 skilled laborers, we knew these brave, caring nurses would give their all to help Hurricane Maria victims.

What we couldn’t have predicted is the heartbreaking, maddening lengths to which these nurses would be forced to go — with no meaningful federal government aid in sight — to provide relief.

This week, along with Democratic Leader Nancy Pelosi (D-CA), Rep. Nydia M. Velázquez (D-NY) and several members of Congress, our recently returned nurses held a press conference to speak out about the horrific conditions they witnessed. And while we are so proud of our nurses for stepping up to help — even sourcing food and water for desperate Puerto Ricans, using the nurses’ own resources — their service begs a question: Where is our government?

Nurses describe dehydrated babies lying listlessly in their mothers’ arms; families sleeping in roofless houses, with dangerous black mold spreading; outbreaks of water-borne illnesses such as leptospirosis, which have already claimed lives. Entire communities the nurses encountered had received no aid at all, and those who did encounter FEMA describe standing in line for hours in blistering heat, only to be presented with paperwork and snack-sized Cheeze-Its.

We cannot be silent while millions of people continue to endure such treacherous conditions. We are grateful to Leader Pelosi, Rep. Velázquez, Rep. José E. Serrano (D-NY), and Rep. Luis V. Gutiérrez (D-IL) for standing up for the people of Puerto Rico — and listening to the nurses. You can check out nurse testimonies and congress member comments below.

It is unacceptable that the richest country on earth is denying necessary humanitarian aid to its own citizens and leaving its people to die. Registered nurses advocate for our patients, and we will continue to demand justice for the people of Puerto Rico until they see the relief they need.

"People were so desperate for drinking water they were forced to make terrible choices — do they suffer from deadly dehydration or drink from contaminated streams that could also lead to death?

It pains us to know that for many Puerto Ricans, the volunteers on this deployment provided the only aid they received — and were only a temporary buffer between life and death. If our volunteer nurses can provide this aid, how has our government, with all of its resources, been unable to do the same?

As someone who has deployed on the USNS Comfort in a previous mission, it is disgraceful that there are empty beds on that hospital ship when there are people requiring medical treatment in Puerto Rico, especially when the hospitals on the island are overwhelmed and are often confronted with failing generators. Lack of electricity in a modern hospital can be deadly. It is unconscionable that the people of Puerto Rico are being left to suffer."

"In one town I traveled to, one of the few where FEMA was present, I met a woman named Rosa who arrived with a family member to apply for aid at 3 am, only to find there were already people in line. FEMA arrived at 7 am, opened its doors at 8, and closed them at 10. Many people in line were never seen, and could not apply for assistance.

For those who made it through the line to apply were told they would be contacted in about 2 weeks. How are they contacted? Through an outsourced company named Send Word Now, that calls, sends text messages or e-mails. What happens if Rosa’s family doesn’t get the follow up notification from Send Word Now because they still don’t have internet, electricity or cellular access?

In the meantime, so many of them were dealing with a life threatening lack of water and food, and weren’t getting any help. Those who have received food through FEMA and municipalities are receiving junk food like pop tarts and Oreos. Over and over again, we went into communities where we were told we were the first relief workers they had seen. And I could not explain why they had not received aid from our government."

"When I travelled to Loíza, I worked with elderly residents who depended on insulin. Because there is no electricity, the insulin cannot be refrigerated, threatening its efficacy. The elderly residents I talked with had put their insulin in a bowl of tepid water, to try to keep it cool so that it would allow them to survive. The fact is that without refrigeration, people with diabetes, hypertension, and other illnesses, are at risk of severe illness and death.

Many pharmacies in Puerto Rico can’t refrigerate medications either. Because of the lack of electricity, many pharmacies also cannot access prescription orders that are stored electronically, so patients cannot get refills without a new prescription. With many doctors’ offices closed, patients who have access to a pharmacy have been scrambling to find someone to write a prescription for them. Others may have access to a doctor, but not a pharmacy.

The horrible living conditions are causing so many health problems for Puerto Ricans. An elderly woman we met was sleeping on a wet mattress, in a roofless house, with no FEMA relief in sight. Sleeping on wet mattresses causes horrible rashes and sores. Is this how we treat our elders?" 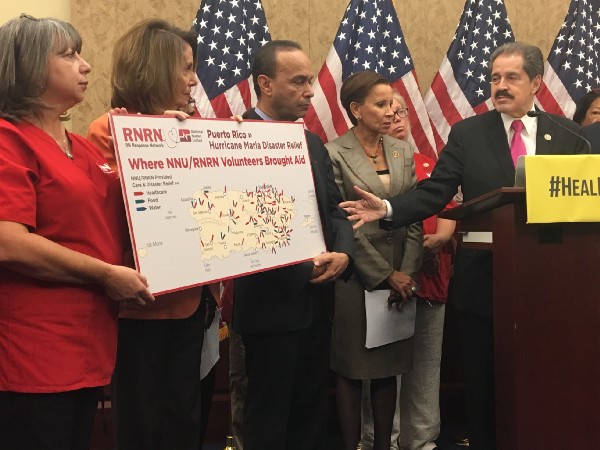 "Thank you to the nurses who have traveled home from the frontlines of the crisis to tell their story. Thank you for saving lives, delivering hope, and fighting for more relief, and thank you for your report, which is quite an indictment.”

“It’s deeply disturbing that the Trump administration continues to pat itself on the back … Just because something has been done, it doesn’t mean much more doesn’t need to be done. Seventy-five percent of Puerto Ricans lack power, 35 percent do not have cell service, one million lack clean running water, three quarters of sewage treatment plants are still not functioning … We are calling on President Trump and the administration to treat this as a national emergency, with the urgency that Puerto Rico deserves."

"Doctors performing surgery are having to use their cell phones as flashlights … We cannot resolve Puerto Rico’s healthcare crisis without addressing the energy grid. With hospitals relying on generators that depend on scarce diesel, every day, there is growing uncertainty that the people of Puerto Rico will continue having access to medical care.

Puerto Rico’s medical system was facing a looming shortfall before Maria; if anything that situation has become even more dire. The island needs an immediate boost this fiscal year to prevent millions of our fellow Americans from losing Medicaid coverage. And we will need to correct the Medicaid shortage for the long term.

Lets be clear, Congress created this problem, and Congress needs to fix it … Fixing Medicaid and the energy grid will not be easy or inexpensive, but they are part of what’s necessary to heal Puerto Rico."

"What we have today here is a group of very courageous people who have given of their time and talent, and we thank you [nurses] for caring and doing that which is so noble, that which so few people do in our society, which is to give help where help is needed … [The people of Puerto Rico] are our fellow Americans; they’ve served in our wars, they do pay taxes, and they should be treated equally … FEMA has to be a support arm, not a stumbling block. Puerto Rico deserves better."

"We have seen the suffering of the people [of Puerto Rico]. Thank you for coming and giving this report. Because I think it is important that people know that people do not have water. I saw the electrical grid go out twice in San Juan when we were there.

Water? Congressman [Adriano Espaillat] and I saw people with water — contaminated water. And even if it reached your house, people don’t trust the water that reaches your house because there is a cross-contamination between the water table where you get your potable water and the sewer system. All you have to do is walk, and you see feces bubbling up, and that’s where people have to walk … [Congress] must fulfill [its] responsibility to the people of Puerto Rico."