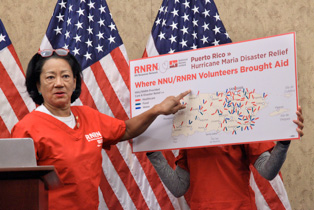 A registered nurse leader, recently returned from spending two weeks coordinating teams of healthcare professionals in a disaster response mission in Puerto Rico, will testify before Congress Thursday on the ongoing humanitarian crisis on the island and the need for more help.

Cathy Kennedy, RN, who is a vice president of National Nurses United, will address the Energy Subcommittee of the House Energy and Commerce Committee which will be assessing the emergency response and emergency infrastructure recovery efforts of the 2017 hurricane season. The hearing is scheduled Thursday, November 2 in Rayburn House Office Building 2123.

What: RN Team Leader Back from Puerto Rico speaks to Congressional Hearing on the “2017 Hurricane Season Review of Emergency Response and Energy Infrastructure Recovery Efforts”

Kennedy served as the lead RN for the healthcare teams who were part of a two week AFL-CIO led delegation of volunteers earlier month that included 50 RN volunteers deployed by NNU through its Registered Nurse Response Network program.

In a Capitol Hill press conference last week in which Kennedy and other RN volunteers were hosted by four members of Congress urging more aid to Puerto Rico, Kennedy explained that “our nurses were deployed across the island, in urban and rural areas, and returned with heartbreaking stories” including, they “saw people who they are afraid will die before food, water or medicine can reach them.”

“Many people they met continued to live in homes with roofs blown off, sleeping on soaking wet mattresses, black mold beginning to spread that can cause rashes, severe respiratory distress and other serious health problems,” Kennedy said at the press conference.

“People were so desperate for drinking water they were forced to make terrible choices -- do they suffer from deadly dehydration or drink from contaminated streams that could also lead to death? Nurses report going into small towns and finding dangerously dehydrated babies lying listlessly in their mothers’ arms,” said Kennedy.

“While we were there, we saw the beginning of a potentially lethal epidemic of leptospirosis, an animal-borne bacterial disease that can be fatal if not properly treated in time,” she said.

At this Congressional hearing, Kennedy will testify how the lack of electricity and energy sources have affected public health in Puerto Rico, as witnessed by the RN volunteers on the ground.

Among the issues, the RNs witnessed:

“It is unconscionable that the people of Puerto Rico are being left to suffer. We hope our elected officials will work to change this,” Kennedy concluded.