RNRN nurse volunteers spent two weeks in Puerto Rico advocating for residents to receive the most basic of care: clean water, food, shelter, medicine. Where was our government?

On Sept. 29, Carmen Yulín Cruz, the mayor of San Juan, Puerto Rico appeared on CNN wearing a shirt emblazoned with the all-caps message: “HELP US. WE ARE DYING.”

Hurricane Maria, a Category 4 storm, had hit Puerto Rico on Sept. 20, completely decimating much of the island.

Millions of residents were left without access to power, food, clean drinking water, medication, healthcare, or shelter (to date, a New York Times report has challenged the official hurricane-related death toll of 64 and put the number as high as 1,052). As the days passed, without adequate federal relief, Cruz’s shirt pleaded: “Is anyone listening?”

The nurses were listening. Cyndi Evans, RN, was at home, when Cruz’s plea for help flashed across her TV screen.

“I turned to my daughter and immediately asked ‘Do you mind if I go to Puerto Rico?’” said Evans, a previous volunteer with the RN Response Network (RNRN), NNU’s disaster relief project. “I know RNRN has the ability to mobilize a nation of [nurses] who have a voice and eyes that can assess and tell what’s needed most.”

To that end, Evans was not alone in her drive to be of service in the heart of a major disaster. Within a matter of days, RNRN’s call for Puerto Rico volunteers resulted in thousands of sign ups, from all 50 states.

These are just a few of the 50 RNRN nurse volunteers who each found their own reasons to leave home and family in order to deploy to Puerto Rico on Oct. 3. The RNRN relief mission was part of a two-week AFL-CIO labor deployment of more than 300 skilled workers, in conjunction with Mayor Cruz.

According to RNRN nurses, what they saw on the ground more than justified the mayor’s appeal for help. Even weeks after Hurricane Maria, entire neighborhoods of local residents that nurses encountered had yet to see a single first responder.

“Many of the RNRN nurses have deployed in previous disasters, including devastating hurricanes, so they know what to expect during emergency disaster relief, but what they saw in Puerto Rico was absolutely shocking,” said RNRN Director and NNU Associate Executive Director Bonnie Castillo, RN. “They found in community after community that Puerto Ricans were facing a deadly lack of food, water, and shelter, several weeks after Maria struck the island. We were left asking, ‘Where is our government?’”

In communities across the island, RNRN volunteers reported Puerto Ricans still living in roofless houses with soaked interiors, where dangerous black mold can create respiratory distress and illness. They also reported outbreaks of leptospirosis, a deadly bacterial disease that, at the time of the deployment, had already claimed lives. According to the nurses, many Puerto Ricans were drinking untreated water from streams. Nurses moved from municipality to municipality, desperately trying to do public health education on how to disinfect the water. Some quick-thinking nurses even walked into a couple of radio stations and managed to get on the air.

“Nurses [went] out into communities, where all [the people asked] for is water and food. And when you have to make a decision of who’s going to get the food today or the water—we shouldn’t have to do that,” said NNU vice president and lead RNRN volunteer Cathy Kennedy, RN. “The United States is the richest country in the world; Puerto Rico is part of the United States.” 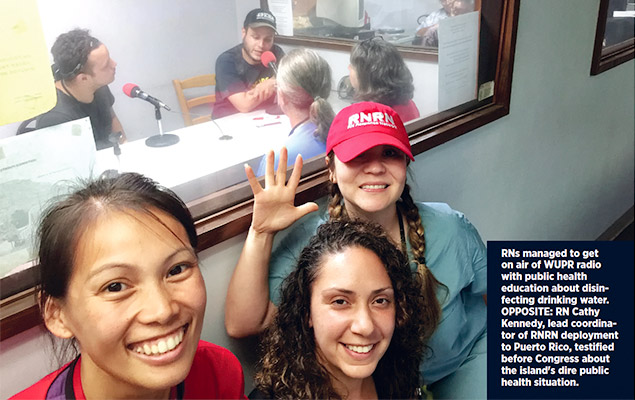 While the federal government claimed, throughout October, that everything was going well in Puerto Rico, nurses described a Federal Emergency Management Agency (FEMA) presence on the island that was sparse at best, and many times, ineffective. People often stood in line for hours in blistering heat, waiting for desperately needed water and food, only to finally see federal disaster officials with paperwork “to collect data,” rather than handing out critical supplies.

“FEMA set up a place where people impacted by the hurricanes could fill out an application to start the process to get money. The wait was four and a half hours, and at the end, they got one water bottle and a snack-sized Cheez-Its,” said Evans.  Nurses are duty bound to protect their patients. So it’s perhaps no surprise that in light of such extreme need on the ground in Puerto Rico, the RNRN volunteers went to sometimes heartbreaking lengths to help provide relief.

Nurses described giving dehydrated local residents their own water, from their own backpacks. Kennedy described how one RNRN nurse, Vanessa Soldo, actually camped out to keep watch over supplies, sleeping next to 20 cases of bottled water that were sitting, waiting to be delivered to needy communities desperate for clean drinking water.

“After being told at one Costco there wasn’t any water yet, they found large flats of water they were willing to sell. Finally they were able to purchase water [at another store],” said Kennedy. “Water is gold for the people of Puerto Rico, and I [asked] myself, where is FEMA?” “Puerto Ricans are starving, and now dying from their water source.

It’s up to us to help them,” said RN Randee Litten, of Eureka, Calif., in an update on a Go Fund Me page that she had established before she left on the RNRN mission. Litten’s RNRN volunteer team used the donations to buy thousands of dollars worth of water and food, in addition to what the AFL-CIO/RNRN deployment was able to supply. 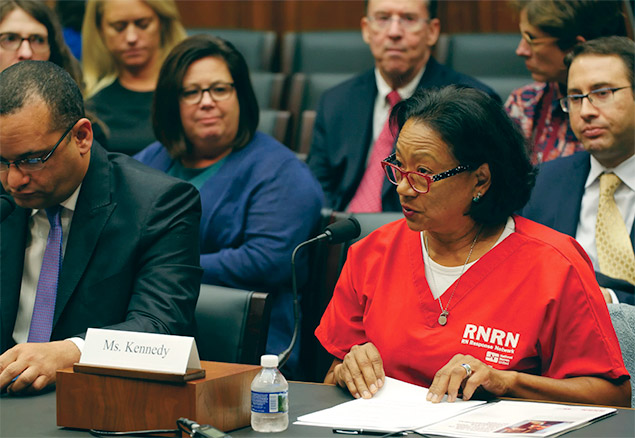 When the deployment came to an end on Oct. 18, that was only the beginning of nurses doing whatever it took to make their voices heard at the highest levels of power, calling on elected officials to stop stalling and take meaningful action to save lives in Puerto Rico.

In an October letter to all members of Congress, NNU Co-Presidents Deborah Burger, RN and Jean Ross, RN called for Congress to take urgent action, calling the response of the federal government “unacceptable for the wealthiest country in the world.”

On Oct. 26, recently returned RNRN volunteers also traveled to Washington, D.C. to hold a press conference with Democratic Leader Nancy Pelosi, Rep. Nydia M. Velázquez, and several other Puerto Rican members of Congress to speak out about the horrific conditions they witnessed. At the conclusion of the press conference, RNs met with Sen. Bernie Sanders to brief him on what they had seen, ahead of Sanders’ own journey to the island.

“It pains us to know that for many Puerto Ricans, the volunteers on this deployment provided the only aid they received and were only a temporary buffer between life and death,” said Kennedy, at the press conference. “If our volunteer nurses can provide this aid, how has our government, with all of its resources, been unable to do the same?”

Kennedy later also testified to the U.S. House of Representatives Committee on Energy and Commerce, at their Nov. 2 panel on the 2017 hurricane season. “NNU urges Congress to use its oversight and appropriation authority to ensure that FEMA and other U.S. agencies respond to this crisis effectively. It is unacceptable that citizens of the riches country on earth have been denied necessary humanitarian aid and left to die,” Kennedy told the committee. “With a growing climate crisis, relief to Puerto Rico must come in the form of responsible measures that can build a sustainable energy future.”

With half of the island still without power, nurses emphasize they will continue speaking out. There is some hope, say nurses, with Sen. Sanders introducing a bill, along with Sen. Elizabeth Warren, on Nov.  28, proposing a $146 million Puerto Rico recovery plan, to allow renewable resources to provide up to 70 percent of the island’s energy needs within a decade. But so much more still needs to be done.

According to Evans, that plea for help from the mayor of San Juan has no expiration date for the nurses, who will continue advocating for the people of Puerto Rico, however they can, from wherever they can. It’s a commitment Evans even got to express to Mayor Cruz personally, when she met her during the deployment.

“Our government doesn’t have it together,” said Evans. “But the nurses did.”