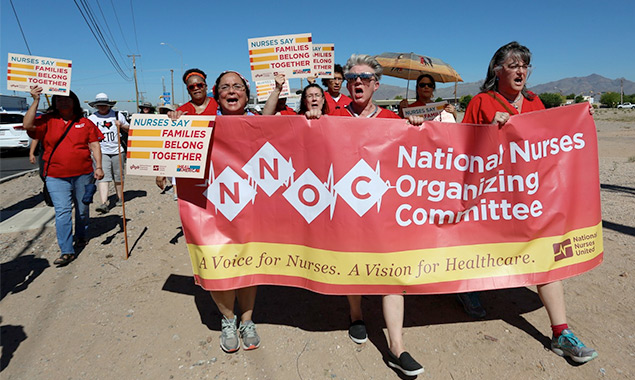 National Nurses United, the largest union of registered nurses in the U.S., representing 1700 RNs in El Paso, TX, is mobilizing at the border and beyond to say the only thing nurses have “zero tolerance” for is the Trump administration’s inhumane immigration policy. Watch for nurses joining marches all over the U.S. on June 30, to stand up for immigrant health and safety.

Idali Cooper, RN, stared out over a blinding-hot expanse of desert at the Tornillo, Texas “tent city” internment camp, wishing nurses would be allowed to assess the condition of the children detained inside. An El Paso-area pediatric RN, Cooper was worried about the health of the kids — now classified as “unaccompanied minors,” even those who were forcibly separated from their parents by the Trump administration’s “zero tolerance” immigration policy.

“It’s inhumane what we are doing to these children. They should be with their parents,” said Cooper, explaining that “toxic stress” — triggered by separation from trusted caregivers — can impact the mental and physical health of children the rest of their lives. Toxic stress can increase children’s risk for illnesses such as depression, diabetes, asthma, cancer and heart disease, among others.

Cooper and her fellow RNs from National Nurses United (NNU), the largest union of registered nurses in the country, have mobilized at the border and beyond in recent weeks to protest the treatment of immigrant children and families, and to draw attention to health risks associated not only with separating more than 2,300 kids from their parents (with no clear plan to reunite them), but also detaining them in conditions that can be detrimental to their health and safety.

“We live in a desert. The temperatures here can reach up to 112, and these kids are being held in a tent. We don’t know if they are getting dehydrated; who is taking care of them?” wondered Cooper.

In addition to desert-based tents, Cooper points out other shelters, like a now infamous converted Wal-Mart in Brownsville, Texas, also keep kids “in crowded conditions, which increases the risk of infectious diseases.” A recent New York Times piece described a Guatemalan mother’s heartbreak after her one allowed phone call with her 8-year-old daughter revealed the little girl had been lonely, “sick and sad” in detention, having contracted pink eye and been put into isolation.

The health of child detainees is also concerning to nurses given that they may already have underlying health issues as a result of their stressful journey to the U.S., through an extremely harsh landscape, as well as from experiencing poverty and violence in their home countries.

“Imagine what these families have been through, walking through the Chihuahuan desert not only for hours, but for days,” said El Paso Mother/Baby RN Virginia Diaz. “Come live in the desert for a day, and you will see what extreme temperatures we have here. It is so inadequate for children to be held in these tents.”

Nurses care for our border communities, have firsthand experience treating immigrant patients, and also know the health risks associated with housing children in harsh, crowded, traumatic settings. But don’t just take RNs’ word for it. Years worth of data from several recent studies and media investigations outline how government agency detention centers are no place to support the health of immigrant kids and families.

“Today is June 19th, the day that Texas freed the slaves. So I’m here today to tell Texas to do the right thing and FREE THE CHILDREN!”#Juneteenth2018 #FamiliesBelongTogether #1u pic.twitter.com/t8DPxjiA5P

A recent investigation by Reveal and the Texas Tribune also found that “taxpayers have paid more than $1.5 billion in the past four years to private companies operating immigrant youth shelters accused of serious lapses in care,” including drugging children, and neglect, sexual and physical abuse. In Texas, “state inspectors have cited homes with more than 400 deficiencies, about one-third of them serious,” including staff members’ failure to seek medical attention for children.

According to the Reveal/Texas Tribune investigation, the government continued to place immigrant children in these facilities, even after serious allegations were raised, and state inspectors had issued citations. And these facilities are now among those holding children separated from their parents.

“We can’t stay silent during this crisis,” says NNU Vice President Katy Roemer. “Families are coming to this country for asylum; they are fleeing violence in their home countries. They don’t deserve barbaric treatment.”

Nurses are duty-bound to help and heal all people. So with no plan to reunite families, despite an executive order claiming to end the policy, and with the potential for entire families to be detained for indefinite lengths of time, RNs are continuing the kind of advocacy that happens at the loudest volume of a collective voice. Speaking up is especially dire, nurses say, given that children have been handed over to government contractors profiting from their mass incarceration, and there seems to a ramping upward, not downward, of detentions, with recent news that a government agency has requested beds for 20,000 undocumented children.

Nurses are deeply aware of the policy’s negative impact on public health, because they make an oath to care for all patients, regardless of background — and also because many nurses across America are themselves immigrants, or the children of immigrants. This may be especially true in our country’s border communities, for nurses such as Cooper.

Virginia Diaz, RN is at El Paso protest to demand that the separation of families STOP NOW!

Imagine families and children in arid desert condition for hours/days in these really hot life threatening conditions. They can get dehydration or heat stroke.#FamiliesBelongTogether pic.twitter.com/56dmmsnqWa

“Both of my parents are from Mexico, and the only reason I ended up being a U.S. citizen is because my mom got a job here in Texas,” said Cooper, who bore witness to the child prisoners at Tornillo not only through the security fence, but also through the vantage point of having simply been born in a different decade. “This could have been any one of us. It could have been any one of us.”

Nurses At Border, Across Country Take a Stand

With that in mind, RNs have been taking action in a variety of ways. A call for volunteers with NNU’s RN Response Network disaster relief program — to be on standby should help be necessary providing first aid to detained immigrant children and families — netted over 900 sign ups in just a few days.

NNU nurses from El Paso and from as far away as Chicago, have also been marching and protesting, in solidarity with immigrant rights groups and concerned citizens, throughout the month, and will continue to do so in major national marches all across the country June 30 (see info below).

“I [have worked in] mental hospitals, and I see how our soldiers are suffering with PTSD. These kids can suffer from the same ailment, PTSD, from what they are encountering — not only what they went through in their home country, but also on their voyage here to us, and then the situations they are confronted with here,” said El Paso RN Hilda Prieto, who came with Cooper to bear witness to the Tornillo internment camp. “That’s why nurses are out here. If there’s an injustice, our government needs to know they have people to answer to.”

The El Paso community will fight the forced internment of innocent children.

Today's march to the ICE Processing Center stretches across Hawkins Blvd. as far as the eye can see. Drivers honk to show support. #KeepingFamilesTogether #TuesdayThoughts pic.twitter.com/PY1fqzAGOQ

Before traveling out to Tornillo, Cooper and Prieto had joined a contingent of dozens of nurses, and around 1,000 community members, earlier in the day, to march on Immigrations and Customs Enforcement (ICE) field offices in El Paso, in an action organized by the Border Network for Human Rights.

“We are nurses, and we care for people all throughout the spectrum,” said Roemer, who had traveled from California to stand up for immigrant rights. “Nurses are really worried about the impact [family separation] will have on children, on families, and our communities, both here in Texas and across the country where these kids are being sent.”

Diaz, who also came out to march to ICE headquarters, says that as a Mother/Baby nurse, she felt compelled to march because, “We understand the importance of mother and child bonding. We understand what the separation does to these children.”

NNU board member Martese Chism, who traveled from Chicago to protest in El Paso, said the date of the march she attended aligned with her long history of fighting for civil rights: “The reason I felt compelled to come here today is because today is June 19, the day that Texas freed the slaves, and so I’m here to tell [our government] to do the right thing and free the children.”

Nurses at the border and across the country will continue to stand up and to speak out for the health and safety of immigrant children and families.

“Everyone, regardless of where you were born, should have rights, and be treated like a human being, not like an animal,” said Cooper. “That’s why nurses are here — to fight for their rights.”

HOW CAN NURSES TAKE A STAND?

Volunteer with RN Response Network to be on standby for potential deployment to provide healthcare assessment and services to immigrant children at detention centers<: CLICK HERE.