Nurses, members of National Nurses Organizing Committee-Texas (NNOC-Texas), representing 1700 RNs from four El Paso hospitals, will join numerous other organizations Tuesday, June 19, in a march to the ICE Field Office in El Paso to protest the forced separation of families and detention of immigrant children.

“As nurses of El Paso who care for the border community in the middle of the Chihuahuan desert we are outraged that the U.S. government is forcefully separating children from their parents and detaining them in tents in Tornillo,” said the El Paso nurses in a recent statement by NNOC-Texas.

Images from the protest: 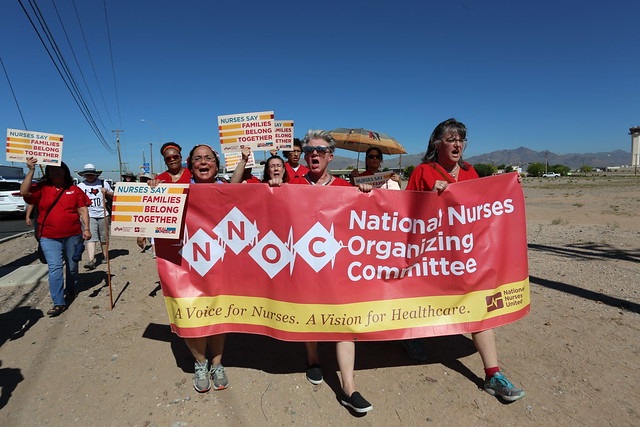 Media Availability: El Paso RNs are available for media interviews on the harmful health effects of the current immigration policies, including forced family separation and the detention of children at the U.S. border.

The current conditions in Tornillo are absolutely harmful to the health and well-being of the detained children say El Paso nurses, and they are absolutely opposed to the plan to expand this practice to Fort Bliss, a desert military base that is larger than the state of Rhode Island and inaccessible to the general public and to local services including healthcare, education and community.

NNOC/NNU have signed on to a letter, circulated by the Border Network for Human Rights, demanding that Attorney General Sessions, Secretary of Homeland Security Nielsen, and Secretary of Health and Human Services Azar.

A full list of the demands can be seen here.