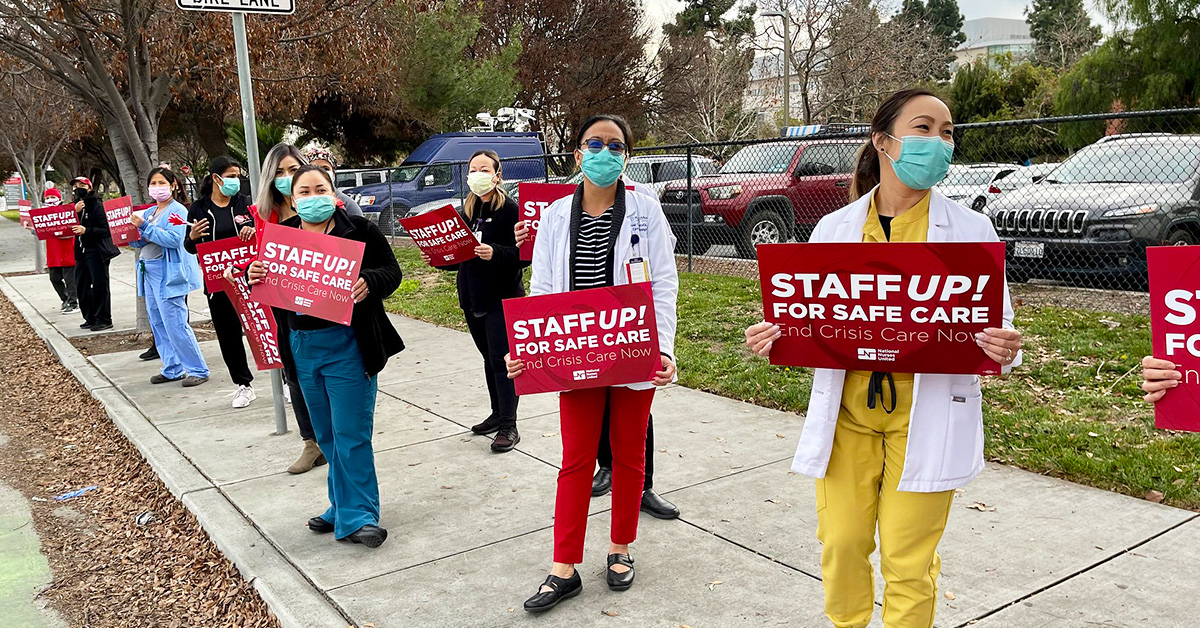 Thousands of registered nurse members of California Nurses Association (CNA) will hold actions on Thursday, Jan. 26, to demand that, instead of scheming to evade and undermine the state’s nearly 20-year-old safe staffing law, the hospital industry immediately provides appropriate numbers of nurses so that RNs can protect their patients, their profession, and their communities. The California protests are part of a national day of action that National Nurses United (NNU), of which CNA is an affiliate, is holding to sound the alarm about how unacceptably low staffing levels across the country, fueled by the hospital industry’s prioritization of money over patient care, have exacerbated the “triple-demic” into an ongoing “quad-demic.”

NNU nurses emphasize that this winter’s surges in RSV, influenza, and Covid-19 patients resulted in crisis conditions because of a decades-long campaign by hospitals to short-staff units and decrease inpatient beds – particularly in pediatric units and units deemed less profitable – all in order to maximize profits.

“We’re the most trusted profession in America because we do everything in our power to take care of our patients, whether it’s at the bedside or on the streets to fight back against corporate greed,” said NNU Executive Director Bonnie Castillo, RN, referencing the December 2022 Gallup polling that found nurses hold the highest professional ranking among Americans for ethics and honesty, a recognition they’ve claimed for the past 21 years. “On our national day of action, NNU members will stand up for staffing models that adequately protect patients, nurses, and our communities against public health crises.”

In California, state regulators are helping hospitals circumvent the decades-old ratios law by encouraging them to apply for “program flexibility waivers.” Nurses say they are determined to uphold and enforce the safe staffing standards they fought so hard to win.

In 1999, CNA successfully sponsored and lobbied the California Legislature to pass A.B. 394, the historic, first-in-the-nation bill that made minimum, specific numerical staffing ratios the golden standard in the Golden State and has inspired similar efforts in other states and by NNU on the federal level. Official research shows that better nurse-to-patient ratios reduce patient mortality. A 2021 study by Dr. Linda Aiken showed that, if New York state had the same staffing mandate as California, at least 4,370 lives would have been saved that year alone.

Earlier this month, 7,000 members of New York State Nurses Association, also an affiliate of NNU, generated national and international headlines by striking for three days over unacceptably poor levels of RN staffing and the need for safe staffing standards. In September 2022, 15,000 members of Minnesota Nurses Association, also an affiliate of NNU, participated in the largest private-sector strike in nursing history, ultimately winning contracts that will give nurses a say in how staffing levels are set for the benefit of nurses and their patients.