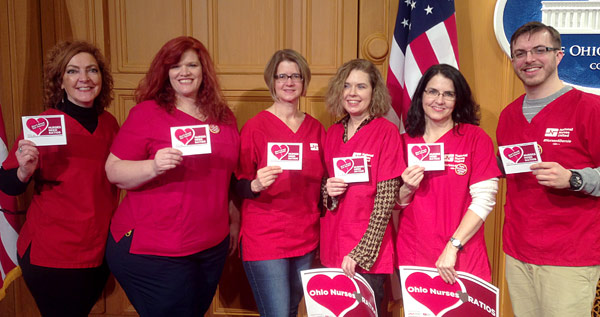 Arguing that hospitals put patient care at risk by overworking essential front-line caregivers, nurses across Ohio are pushing lawmakers to limit the number of patients for whom they are responsible.

"I've had as many as nine patients in my care. I have left in tears because I don't feel I can give the best possible care for my patients," said Stephanie Still, who has worked 10 years in nursing in Akron and currently at Affinity Medical Center in Massillon.

"We definitely need this bill and this law to hold hospitals accountable."

Nurses came to the Statehouse on Tuesday to advocate for Senate Bill 55, sponsored by Sen. Michael Skindell, D-Lakewood, which would create new nurse-to-patient ratios and protect nurses who refuse to comply with violations of the law.

Michelle Mahon, who has worked as a nurse at the Cleveland Clinic and is now with National Nurses United, said the bill is similar to a law passed in California in 2004.

Mahon said arguments were made that it would cause hospitals to close, would cost too much money and could not be done because of a nursing shortage.

"No hospitals went bankrupt. More nurses came to the profession," Mahon said. "And nurses now are satisfied with the care they are able to provide."

Patient outcomes also improved in California, Mahon said. "This measure is desperately needed in our hospitals ...; so we can protect our patients against a hospital industry that frequently places profits over patient care."

Asked about reports of nursing shortages in Ohio, Mahon said, "There is a shortage of nurses willing to work in the unsafe conditions that exist in our hospitals. When you fix that, nurses will come back."

Citing long hours, too many patients and being forced to skip meals or bathroom breaks, Mahon said half of nurses with bachelor's degrees leave the profession within five years.

Under the bill, the nurse-to-patient ratio would be 1-to-1 for patients in an operating room, in a trauma unit, needing resuscitation or for unstable newborns. It rises to 1-to-3 for pediatric units and pregnant patients not in active labor.

For situations not specified, a hospital-wide committee would implement ratios, which must be posted in public view.

"Having mandated staffing ratios doesn't give hospitals the flexibility to meet those demands coming from their communities," he said.

In 2008, the state implemented a nursing staffing law under which hospitals form internal committees to determine staffing levels, Palmer said.

"It's important to have that kind of cooperation rather than a mandated staffing ratio," he said.