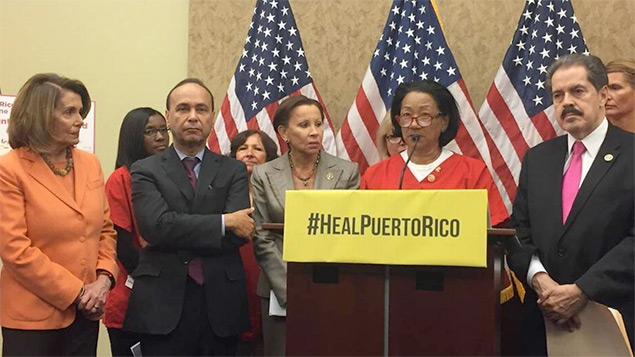 When Sen. Nancy Pelosi called on President Donald Trump this week to increase aid to the residents of hurricane-devastated Puerto Rico, Sacramento-area nurse Catherine Kennedy was by her side.

Kennedy, a neonatal nurse at Kaiser Permanente’s Roseville Medical Center, led a team of 50 nurses from around the United States on a disaster relief mission in Puerto Rico from Oct. 4-18.

She said she is concerned that contaminated water, a lack of food and black mold will increase the death toll from Hurricane Maria, which struck the island Sept. 20 with Category 4 velocity. She said she thinks the federal government should quickly provide materials to cover damaged roofs, dedicate resources to fixing the energy grid, ensure medical personnel are available around the island, distribute water filtration systems, and stop price-gouging.

Kennedy visited a hospital that was running off electrical generators, she said, so it was impossible to do a procedure like an MRI because it required more power than a generator could provide. Every day between noon and 2 p.m., she said, it rains, and everything gets wet because roofs on homes and buildings have not been repaired yet. Black mold, she said, is a real danger to everyone.

“By the time we got out there and started treating these folks, they said to us, ‘You’re the first people we’ve seen since the hurricane,’ ” Kennedy said in an interview. “They were desperate. They needed water; they needed food.”