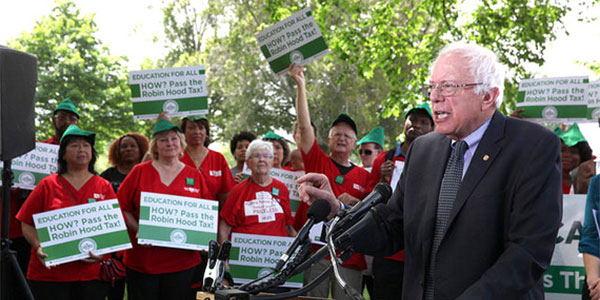 New research findings from a team of progressive economists provides documentary evidence that the financial footing for Sen. Bernie Sanders visionary social change agenda is not only plausible, but would create far more socially productive jobs, as well as moving us down the road to the more humane society that is at the heart of the Sanders campaign.

In their push to vilify Sanders, Democratic Party acolytes from the media to academia have fallen in line attacking the economic foundations of his campaign for free public college tuition, Medicare for all, job creation through infrastructure repair, and other critical needs.

But a new report from the University of Massachusetts Amherst Political Economy Research Institute documents how a key Sanders proposal - a tax on Wall Street speculation -would bring at least $300 billion a year in new revenues from those who can most afford to pay it for the critical reforms the country so desperately needs.

Sen. Sanders with National Nurses United members at the introduction of his College for All Act funded by a tax on Wall Street speculation

Further, the report by Robert Pollin, lead author, and his colleagues James Heintz and Thomas Herndon, breaks new ground in documenting that the tax would be a huge boon to the economy in creating millions of new jobs in education beyond what the same spending creates on Wall Street.

And contrary to the critics would not dampen productive investment, which has fallen sharply under the reckless Wall Street behavior of recent decades.

Taxing Wall Street speculation to finance free public college tuition, as Sanders talks about on the campaign trail, and has introduced in legislation, S 1373, the College for All Act, could create a net expansion of 4.2 million jobs. Not to mention securing equal educational opportunity for everyone, regardless of background or ability to pay.

Investing in education produces more than 8 times the number of jobs created by the same spending in financial services, the authors explain.

This finding parallels a 2009 National Nurses United study that found conversion to a Medicare for all health care system, as Sanders also proposes, would create millions of new, good paying jobs, as would a green economy as Pollin documented in his 2012 book “Back to Full Employment.”

Simply put, a socially productive economy, from education to healthcare to renewable energy is also a job creation engine.

The report’s second ground breaking finding is that taxing Wall Street speculation would not harm productive investment in the economy, as the Wall Street shills constantly allege.

Since the 1970s, with the escalation of a neoliberal program of decimation of our manufacturing sector with outsourcing, globalization, and the domination of the financial sector of the economy, there has been an 18-fold increase in Wall Street trading over productive investment in the economy, Pollin, Heintz and Herndon reveal.

As the authors note Wall Street speculation “has not delivered” in “investments in physical plants and machinery that can deliver technical innovations (that) raise overall productivity.”

In other words, the idea that the speculation tax would harm productive investments in a corporate dominated economy through outsourcing, unfair trade pacts from NAFTA to the Trans Pacific Partnership proposal, and domination by Wall Street, that has long abandoned manufacturing jobs at home and harmed millions of working class families is nonsense.

For those new to the idea of a speculation tax, or as nurses call it, the Robin Hood tax, is explained by Pollin, Heintz and Herndon. 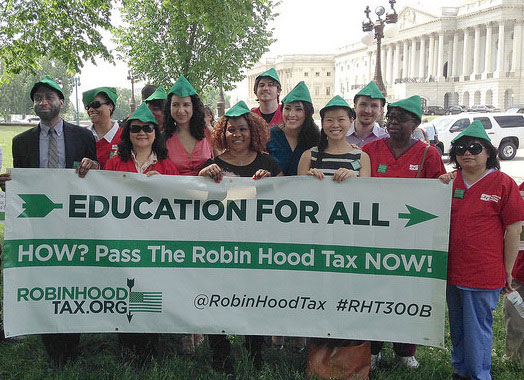 Compare that to the average sales tax in the U.S. of 8.4 percent, or $84 on every $1,000 most Americans pay on nearly every consumer item, from shoes to tooth paste.

And, raise at least $300 billion a year, not from regular Americans who make occasional stock trades, but from the Wolves of Wall Street who make thousands or millions of trades a day, often through computerized algorithms.

Individuals with annual incomes under $50,000 and families under $75,000 a year are exempted through the two bills Sanders has introduced, S 1371, the Inclusive Prosperity Act, which parallels a companion House measure, HR 1464, introduced by Rep. Keith Ellison.

No surprise, Wall Street moguls, and their surrogates in the media and Washington, hate it. They don’t want any restraints on their profiteering and stranglehold on the economy. But, shamefully, many in the liberal and Democratic Party elite, from Hillary Clinton to her surrogates in the Democratic National Committee and Congress have also attacked Sanders social change agenda as “pie in the sky.”

Even though a similar tax is in place in most of the world’s major financial markets, is in the process of implementation in the European Union, and actually existed in the U.S. for the first half of the last century.

Far from the fear mongering here, a Wall Street tax is achievable, it would have an enormous salutary effect on our economy, and help lead the way to a program of such critical needs as education and health care for all, good paying jobs, and forceful action on the climate crisis - just as Bernie Sanders proposes.