Ratios: Learning from the California experience 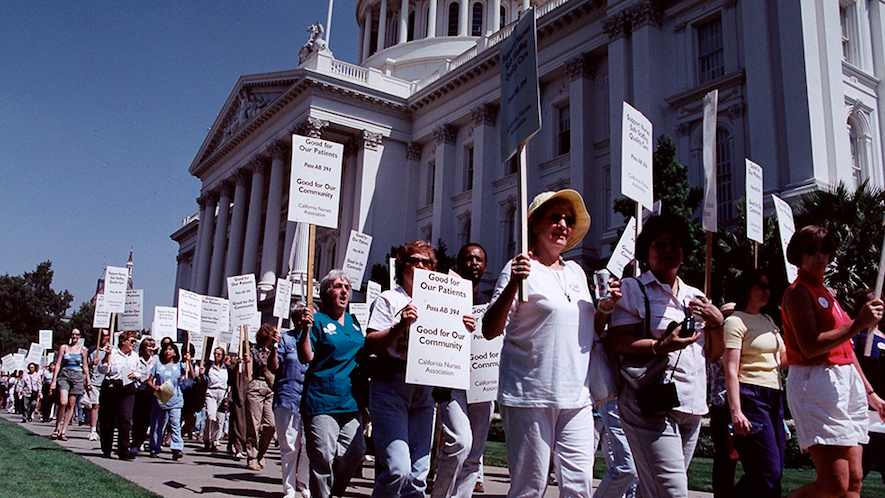 California is the only state out of the entire country where a minimum RN-to-patient ratio is the law. How?

In 1999, the registered nurses of the California Nurses Association successfully sponsored and lobbied the California Legislature to pass and then-Gov. Gray Davis to sign A.B. 394, the historic bill that made minimum, specific numerical staffing ratios the golden standard in the Golden State. But this unprecedented victory did not just happen overnight. In fact, CNA members had attempted on multiple occasions for almost a decade to pass safe staffing ratios in the state.

The final winning effort followed an extensive grassroots campaign by RNs with broad support from patients and the general public that included thousands of letters, calls, and a massive rally on the steps of the Capitol in Sacramento on the day of the final legislative vote.

Hospital executives and the hospital industry, including the California Hospital Association, lobbied extensively to defeat the law. Once passed and the actual numbers were under discussion through the regulatory process, the industry argued for ridiculously high ratios. Registered nurses again successfully advocated for safe numbers at a minimum, with additional staffing depending on acuity. Subsequently, the industry has sought to undermine ratios at every turn, filing lawsuits to block enforcement of the ratios at all times by permitting averaging, encouraging hospital managers to evade the letter and spirit of the law, and recruiting compliant allies to propose measures to overturn A.B. 394. 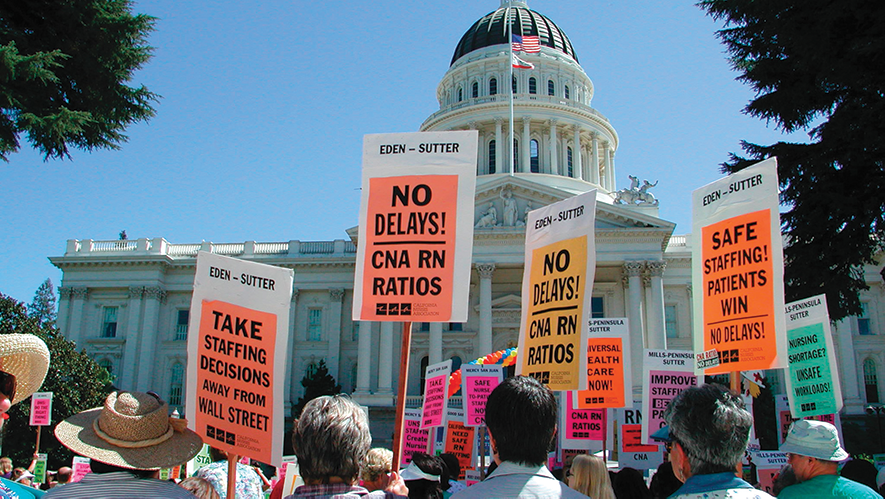 These seminal safe staffing ratios took effect in all California acute-care hospitals on Jan. 1, 2004. The sky did not fall. Hospitals did not close en masse as a result of needing to comply with the safe staffing laws. Patients were not turned away from emergency departments.

What did happen is that nursing in California became a much more rewarding profession again. RNs within the state not only returned to the bedside, but the California ratios attracted nurses from across the country who appreciated being able to practice nursing under a safe working environment and actually get to spend time with their patients. Nurse recruitment and retention have improved, saving hospitals from the expense and clinical disruption of rapid turnover among nursing staff. Most importantly, staffing ratios have improved safety and saved lives.

In a landmark 2010 research project, the most comprehensive study done on the California RN staffing ratios law, the country’s foremost nursing researcher, director Linda Aiken, PhD, RN of the Center for Health Outcomes and Policy Research at the University of Pennsylvania School of Nursing, concluded that ratios are the single most effective nursing reform to protect patients and keep experienced RNs at the bedside.

The study found that California nurses on average care for two fewer patients in general surgery units than nurses in Pennsylvania and New Jersey. Fewer patient assignments mean fewer California RNs miss changes in patient conditions because of their workload and ultimately translated into fewer patient deaths. The study found that New Jersey hospitals would have 14 percent fewer deaths and Pennsylvania 11 percent fewer if they matched California’s 1:5 ratios in surgical units.

As Aiken put it, “One of the best natural experiments occurred when California enacted mandated nurse-to-patient ratios. When it was implemented on Jan. 1, 2004, the hospitals that were not in compliance to the staffing ratios had to change on that day and they did. Our research has shown that staffing did change substantially in California hospitals -- even in safety net hospitals, which have been very difficult to get to change on hospital nurse staffing...Almost 15 years later, California still has the best nursing-staffed hospitals in the country. The state has seen steeper declines in mortality and improvements in other indicators than other states.”

Despite the clear need for and benefits of staffing ratios proven by 15 years of the California law, the hospital industry relentlessly tries to weaken or block such legislation, both in California, other states, and at the federal level. The bottom line is that they care only for the bottom line; the industry resists any sort of regulation on whatever working conditions they wish to impose on their nursing staff -- even if patients suffer or even die, nurses’ licenses and the integrity of their practices are put at risk, and such conditions drive nurses away from the bedside or clinic.

But the California experience has shown that when registered nurses work collectively, we can win and defend safe staffing ratios for our patients and ourselves!