Why do nurses support Sen. Sandersâ€™ Medicare for All Act? 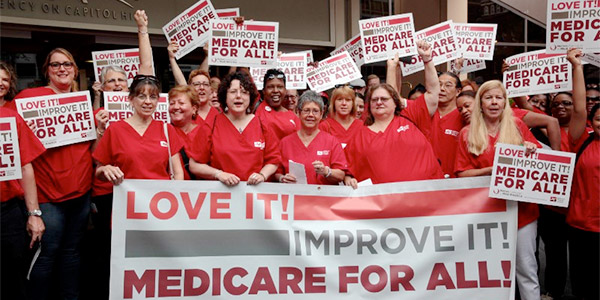 When nurses stand up for Medicare for all, guaranteed healthcare as a human rightâ€Š—â€Šwhich some have dismissed as a “free pony,” despite its existence in every other major industrialized nationâ€Š—â€Šwe know that we are fighting beyond disdain, beyond political or corporate jargon, on the ground, for real patients whose names we speak, whose hands we hold, whose families we know, and whose very last breaths we have witnessed, often far too soon.

The GOP has tried and failed in recent months to repeal the Affordable Care Act (Obamacare), and in the resulting void, now is the time to stop all attempts to move backward or to stand still, and instead to move forward. To that end, this week, Sen. Bernie Sanders is unveiling new legislation, the Medicare for All act of 2017, to advance genuine universal care for everyone, regardless of ability to pay, gender, race, nationality, or background.

To emphasize why nurses across America stand with Sen. Sanders on this humane legislation, I’d like to take a moment to illuminate exactly what inspires nurses to fight. If we need to underscore the dire necessity for this bill’s passage, there are millions of stories to tell. Let’s zoom in on the last breath of just one patient whose final moments were filled with suffering, in a system that failed her.

“There are patients that I think of almost every day. One young woman still lives deep in my heart,” says National Nurses United member Melissa Johnson-Camacho, RN, who is speaking out in Washington, D.C., in support of the Medicare for All Act. “Her cancer had metastasized and her lungs constantly filled with fluid. She needed to have that fluid drained in order to breathe, to survive.”

Noticing that her patients’ lungs never totally drained, Johnson-Camacho asked why, given that a medical intervention existed to clear them completely of fluid. The answer? Because she couldn’t afford it.

“These bags are very expensive and her insurance did not cover the full cost. So she was never able to have her lungs fully cleared and was in constant distress and pain struggling to breathe,” says Johnson-Camacho. “To make matters worse, the insurance policy soon renewed, meaning a new annual deductible was in place. At that point she had to pay the full amount for her medications and supplies until the deductible was met.”

“That young woman spent the rest of her life in unnecessary stress, unnecessary pain, and unnecessary agony. She never again was able to take a full breath.”

To reiterate: the last breath of a fragile, valuable, loved human being was one in which she was drowning in fluidâ€Š—â€Šbecause she could not afford the privilege of breathing. It’s difficult to find the words to describe the injustice our patients must bear, and how much it hurts to witness, even for nurses who have been steeled to the realities of illness and death. 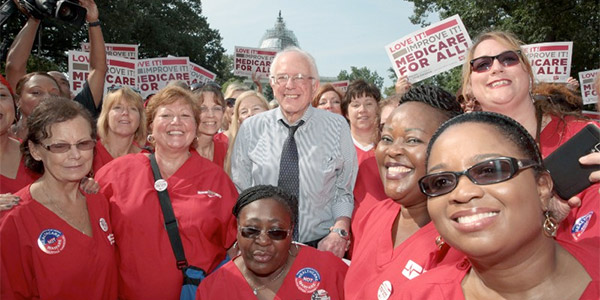 As nurses, we can spend all day citing data to convince those who need statistical proof that it’s time for Medicare for all. According to a July Associated Press/NORC Center for Public Affairs Research poll, 62 percent of publicâ€Š—â€Šand 80 percent of Democratsâ€Š—â€Šbelieve it is “the federal government’s responsibility to make sure that all Americans have health care coverage.”

But really, for nurses, the fight for Medicare for all is fueled not just by data, not just by sponsorships or by popular opinion, but by basic humanity. We’ve made an unshakeable oath to protect our patients, and we can never, ever be quietâ€Š—â€Šor accept the ongoing idea that now is not the right timeâ€Š—â€Šwhen we have seen, with our own eyes, members of our communities suffer and die unnecessarily. 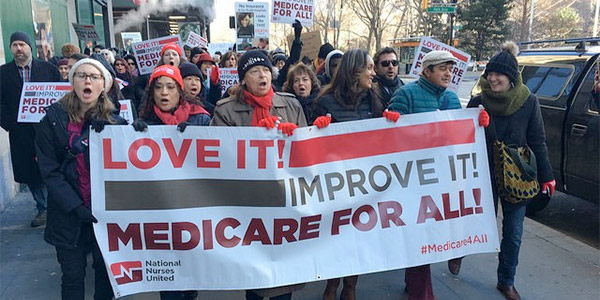 Nurses are proud to stand with Sen. Bernie Sanders and the Medicare for All Act of 2017’s growing list of supporters, because this is a stand for mothers, fathers, children, neighbors, friendsâ€Š—â€Šreal, actual human beings, all across Americaâ€Š—â€Šwhose lives hang in the balance. Patients like Melissa Johnson-Camacho’s. Patients who could be any one of us, or someone we know and love.

The profit-driven private insurance industry can bet its last, morally corrupt dollar that nurses will never forget the tragic moments to which we have borne witness, day after day. We speak our patients’ names, we can’t forget their faces, and we will never stop fighting until they have guaranteed access to healthcare as a human right.

It’s time for Medicare for all. Now. Today.