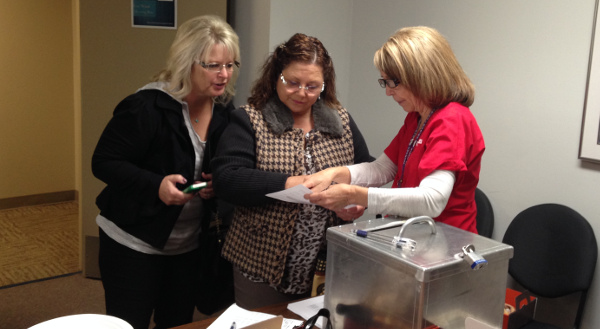 Registered nurses at six Tenet Health hospitals from Northern to Southern California are voting this week on a new four-year agreement with the hospital system that protects health coverage and provides for pension and economic gains.

Nurses are voting on the settlement, which has been endorsed by the nurses' bargaining team, throughout this week at membership meetings at the six hospitals. The agreement covers 3,000 RNs who are represented by the California Nurses Association/National Nurses United.

"Nurses are happy and excited about the gains we have made. The agreement strengthens our ability to provide the best care for our patients," said Laura Bruce, RN at Desert Regional Medical Center in Palm Springs. "We stood together and were able to maintain our health coverage, safeguard our retirement, and ensure optimal standards for patient care for Ebola and other infectious diseases, and other improvements."

"Congratulations to the Tenet RNs for standing strong to protect their living and workplace standards for their patients, their colleagues, and their families. We are proud of you," said Zenei Cortez, RN, CNA Co-President.

At a time when many labor contracts are premised on substantial cuts in workplace and living standards for nurses and other workers, the RNs successfully negotiated an agreement that includes no reductions in their existing standards.

At the heart of the settlement for the RNs was the agreement assuring that the California Tenet RNs maintain their fully employer-paid family medical coverage. Tenet will also increase its contributions to the RN retirement plan, expanding retirement security for nurses who care for Tenet patients.

Additionally, the agreement builds on existing commitments by Tenet to adhere to state laws and regulatory protections, including the new safeguards adopted by the California Occupational Safety and Health Administration for nurses who care for Ebola patients.

The new California regulations, widely viewed as a model for the nation in setting the highest level of required personal protective equipment and training, came as a result of a widespread campaign by CNA and NNU members this fall, including Tenet RNs.

Further, Tenet will set up a statewide task force including CNA-represented RNs for broader discussion of how to improve infections disease precautions at the facilities covered by the pact.

CNA represented nurses in Tenet California facilities will receive at least a 10 percent wage increase over the four years.