Strike Is On Tuesday at 10 Northern California Hospitals 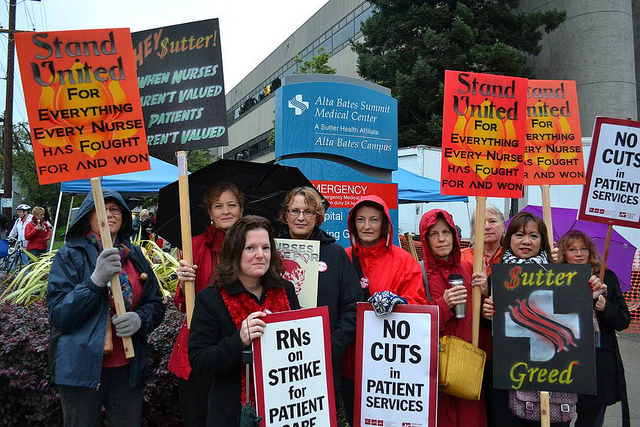 Registered nurses at 10 Northern California hospitals will strike on Tuesday, November 20, to protest employer demands for sweeping cuts in nurses’ and patient care standards. Some 5,000 RNs are represented by the California Nurses Association/National Nurses United at the 10 hospitals.

It will be a two-day strike, Nov. 20 and 21 for 3,300 RNs and several hundred respiratory, X-ray and other technicians who work at eight Sutter corporation hospitals – Alta Bates Medical Center facilities in Berkeley and Oakland, Eden Medical Center in Castro Valley, San Leandro Hospital, Sutter Solano in Vallejo, Sutter Delta in Antioch, and Novato Community Hospital.

Another 1,500 RNs will be on strike for one-day, Nov. 20, at two San Jose HCA-affiliated hospitals, Good Samaritan Hospital and Regional Medical Center.

All picket lines begin at 7 a.m. Strike rallies are planned for Tuesday, Nov. 20 at:

Why the Nurses Are on Strike:

Sutter: This is the latest protest over demands by Sutter corporate officials for sweeping reductions in patient care protections and nurses’ contract standards – despite Sutter being one of the wealthiest hospital chains in the U.S.

At Alta Bates Summit Medical Center hospitals in Berkeley and Oakland, for example, management is insisting on elimination of paid sick leave, effectively forcing nurses to work when ill, exposing already frail and vulnerable patients to further infection.
Sutter hospital officials are also demanding termination of all health coverage for nurses and techs who work less than 30 hours per work – which would end health benefits entirely for 435 RNs and 31 techs at Alta Bates and 100 RNs at Eden and San Leandro, a proposal nurses call unconscionable and immoral.
By contrast, officials at a number of Sutter hospitals, including Mills-Peninsula Health Services in San Mateo County Sutter Santa Rosa, Sutter Lakeside in Lakeport, Sutter VNA of Santa Cruz, Sutter Roseville and Sutter Auburn Faith have all reached agreement on new contracts with nurses after withdrawing concession demands.

San Jose: The key issues are hospital management’s rejection of the nurses’ proposals for improvements in safe staffing and other patient care conditions, including sufficient staff for incoming patients and designated lift teams to safely move and transport patients to reduce accidents and injuries to nurses and patients alike.

Additionally, the nurses are protesting employer demands to eliminate guaranteed pensions for RNs as well as major cuts in health, dental, and vision care benefits.

·        Sutter has accumulated nearly $4.2 billion in profits since 2005, according to its own audited financial statements.
·        Sutter is among the wealthiest hospital chains in the U.S. – and has the highest net patient revenue per employees among U.S. hospital systems, according to a Modern Healthcare survey
·        Sutter paid 28 top executives more than $1 million in compensation, an aggregate $46.7 million in 2010 alone, by far the most lavish spending on executives among all California hospital systems.
·        Sutter is presently building a massive new, 300,000 square foot administrative office center in Roseville, another sign of its expansive wealth, and spending away from the bedside.
·        Sutter is spending tens of millions of dollars on a questionable computerized electronic medical system, Epic Systems, the same controversial system that has been charged with putting patients at risk at Contra Costa County’s correctional facility

·        Eliminating paid sick leave, effectively forcing nurses to work when ill, exposing already frail and vulnerable patients to further infection.
·        Forcing RNs to work in hospital areas for which they do not have appropriate clinical expertise, again a safety risk for patients.
·        Huge increases in nurses’ out-of-pocket costs for health coverage for themselves and family members.
·        Limits on the ability of charge nurses, who make clinical assignments for nurses, to address staffing shortages, subjecting patients to the danger of unsafe staffing.
·        Forcing RNs to work overtime, exposing patients to care from fatigued nurses who are more prone to making medical errors.
·        Cutting the rest time between shifts to 6 hours, an unsafe precedent for patients and the hospital workforce.
·        Eliminating all health coverage for nurses who work less than 30 hours per week and slashing the pay in lieu of benefits for all non-benefited nurses.
·        Reduced pregnancy and family medical leave, undermining RN families.

·        Safe staffing at all times, including during admissions of new patients and when patients are being prepared for surgery, two serious holes that affect safe care.
·        Charge nurse on every unit free of patient care assignment to allow full coordination of patient needs.
·        Designated lift teams to safely move and transport patients without harm or injury to nurses and patients.
·        Employer demands to eliminate a guaranteed, defined pension plan for RNs, and major cuts in health care, dental, and vision care benefits.