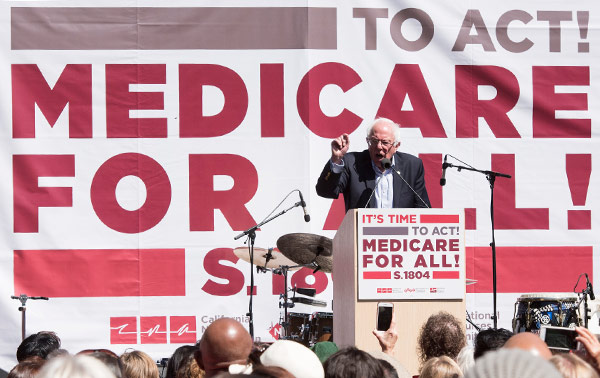 In a convention highlighted by Sen. Bernie Sanders and California Lt. Governor Gavin Newsom promoting single payer legislation federally and in California, some 500 California Nurses Association/National Nurses Organizing Committee delegates unanimously reaffirmed their commitment to work to implement an improved and expanded Medicare for all Saturday.

Meeting in San Francisco, convention delegates also endorsed resolutions to protect and defend nursing practice and patient advocacy in an era of corporate medicine, the right to collective action at a time of growing attacks on unions and workers’ rights, environmental and climate justice, comprehensive immigration reform and a #PeoplesPlatform for social, economic, racial, and political justice.

In a speech that drew widespread California and national coverage, Sen. Sanders, author of the Medicare for all bill, S. 1804, Friday stepped up the call to defeat the Graham-Cassidy Amendment, adding, “we have to understand that maintaining the status quo is just not good enough.

“Our job is not job is not just to prevent tens of millions of Americans from being thrown off the health insurance they currently have, but to join every major country on earth and guarantee healthcare to all, as a right, not a privilege,” Sanders said.

Introducing Sanders, RoseAnn DeMoro, executive director of CNA/NNOC and NNU, noted, that “poll after poll is showing that single payer is what the people want. “ She called on the audience to contract their Senators asking them to sign on as co-sponsors of S. 1804 “and tell them we’re going to hold them accountable.”

Lt. Gov. Newsom praised CNA members for pushing to enact the CNA-sponsored California state single payer bill SB 562 currently blocked in the California Assembly by Speaker Anthony Rendon after passing the State Senate in June. “There is no reason to wait around on universal health care. It’s time to dust off 562, its time to move 562 along, it’s time to get it out of committee. Its time to move it along the legislative track. It’s time to do that now.

“It’s a question now of leadership, it’s a question of commitment, it's question of resolve,’ said Newsom, the leading candidate for California Governor in 2018. “My resolve to you, if we can’t get it done next year, you have my firm and absolute commitment as your next governor, I will lead the effort to get it done. We absolutely will get it done.”

An Improved Medicare for All Resolution

On Saturday, convention delegates re-iterated support for both bills in a resolution that called for eliminating the role of insurance companies in healthcare “and the human suffering they cause,” and pledged that CNA/NNOC would only endorse candidates who support single payer.

Delegates vowed to “vigorously oppose” technology that is used to “replace, override or undermine” the professional practice of RNs and their ability to protect patients, and harassment and retaliation by nurse executives, managers and consultants of nurses who advocate for patients or challenge market-based healthcare restructuring schemes.

“This is a fight to protect our profession,” said a California RN, and “challenge those who want to deregulate healthcare in pursuit of profit.”

The resolution warns of national “right to work” legislation that erodes conditions not just for unions but for all working people, as well as the new management-dominated National Labor Relations Board. It pledges CNA/NNOC members to work to protect worker and union rights.

Delegates resolved to “work with our allies inside and outside the labor movement” to challenge “right-to-work” legislation “and similar legislative assaults on working people proposed by ALEC (the American Legislative Exchange Council)” and politicians aligned with them.

“We must expose the expansion of ‘right-to-work’ laws that make the nursing profession weaker,” said a Texas RN.

Resolution on Environmental and Climate Justice

Delegates agreed to work with local communities and activists to “resist fossil fuel interests” and projects such as new pipelines, deep-sea drilling, fracking, oil trains, export terminals for coal, petroleum coke, and refinery expansions, as many CNA/NNOC members have long done. They also endorsed returning the U.S. “back into the community of nations seeking to address climate disruption,” and supporting a “just transition” for workers in fossil fuel related jobs.

A California Central Valley RN described how nurses see the rise in childhood asthma rates from environmental pollution. “We are a science based profession, we have to take a stand for the future of our world, and I stand here for my grandchildren.”

Delegates said they will work with labor, immigrant rights and human and civil rights organizations to “safeguard the civil rights and liberties of all immigrants” including the right to due process, and opposing the profiling of people based on race, ethnicity or immigration status. They also called for comprehensive federal legislation with a patient to citizenship and an end to arbitrary raids, roundups, and deportations.

Numerous delegates described their own background as immigrants or the child of immigrants. An Illinois RN cited examples of undocumented patients “afraid to show up for care” because of fear of immigration agents. A Florida RN warned “we are creating an environment of fear among immigrants who make an important contribution to this country.”

Resolution in Support of a #PeoplesPlatform

The convention concluded with the formal seating of new national officers and a national board of directors.