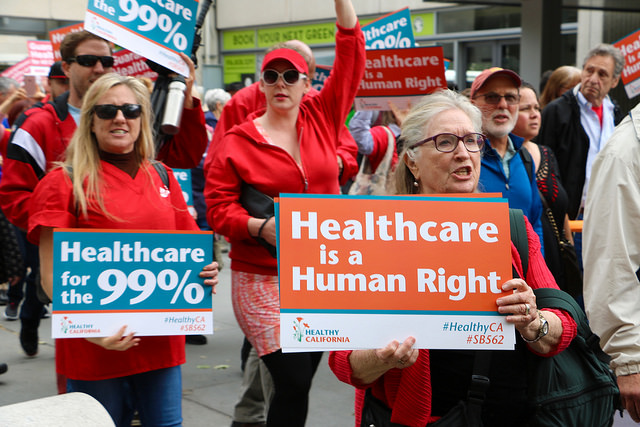 As New Poll Shows Majority of Democrats Back Single Payer, Nurses Urge All California Assemblymembers to Take a Stand

Sen. Bernie Sanders, who polls have shown has the highest popular support of any national political figure, today joined the growing public criticism of the decision by Assembly Speaker Anthony Rendon to arbitrarily block action on a California bill to block guaranteed healthcare for all Californians.

"I am extremely disappointed that the Speaker of the California Assembly is refusing to allow S.B 562, the Single Payer Health Care bill passed by the State Senate, to come to the Assembly floor for a vote,” Sen. Sanders tweeted today.

“At a time when the United States is the only major country on earth not to guarantee health care for all, and when tens of millions of Americans are uninsured or underinsured because of outrageously high costs, California has the opportunity to lead this nation in a very different health care direction.  If the great state of California has the courage to take on the greed of the insurance companies and the drug companies, the rest of the country will follow.  The eyes of the country are on California today.  Let's go forward," Sanders said.

Concurrently, the California Nurses Association/National Nurses United, lead sponsor of SB 562 is calling on all California Assembly members to declare their support for the legislation, noting there is still time for the Assembly to act on the bill this session.

Rendon’s action came just one day after the Senate revealed it’s proposed legislation to overturn the Affordable Care Act and leave millions more Californians without health coverage or paying enormously more out of pocket for already over priced needed care.

“With daily reminders of millions of patients already priced out of access to care, and subjected to the callous practices and care denials of the insurance industry there could hardly be a more heartless response to the Senate bill than Speaker Rendon’s Friday night announcement,” said CNA/NNU Co-President Deborah Burger.

Rendon’s announcement came just hours after CNA “submitted an additional set of proposed amendments in advance of the first Assembly hearing to begin the ‘completion’ of the bill Speaker Rendon had said was missing, a clear sign that his decision was not only unconscionable but also disingenuous in even the reasons he cited for freezing the bill,” Burger said.

“Rather than encouraging the normal legislative process to proceed, he hastened to abort the legislative process, deprive the thousands of Californians who have rallied and campaigned for SB 562 to participate further in hearings, and leaves our entire state at the mercy of a profit-focus insurance industry and an inhumane bill pending in Congress,” Burger added.

Rendon’s action also came out just one day after a new national poll showing broad support among Democrat voters for a Medicare for all system, as SB 562 would create for California.

The Pew Research Center survey found that 60 percent of all Americans say the federal government is responsible for ensuring health coverage for all Americans, and 52 percent of Democrats specifically favor a publicly financed, single payer system, such as proposed in SB 562. Support among young Democrats, who are critical to the future of the Democratic Party, is even stronger. Pew found two-thirds of Democrats and Democratic leaners under 39 favor single payer.

Since issuing his late Friday afternoon announcement, concocted in secret in an reminder of the secret process followed by U.S. Senate Majority Leader Mitch McConnell in crafting his draconian bill, Rendon has been bombarded on social media by those condemning his action.

“Nurses and the activists who are so critical to rebuilding the Democratic Party after a decade of massive losses across the country will not be silent in demanding all corporate Democratic officials, including Rendon, become part of the movement to join the community of nations in guaranteeing healthcare for everyone,” Burger said.