San Bernardino Nurses Head to Board of Supervisors Next Week 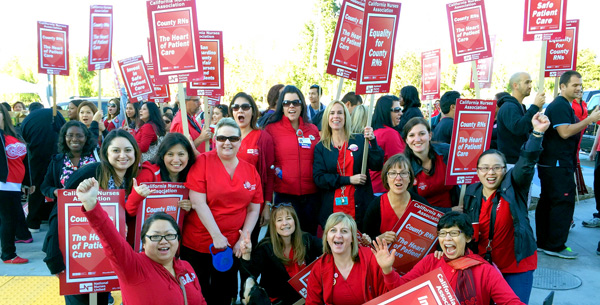 Following a two day walkout at San Bernardino County’s Arrowhead Regional Medical Center and County clinics, registered nurses will call on the San Bernardino Board of Supervisors next Tuesday to press the Board to commit the resources needed to address the critical staffing retention issues at the County.

The Board has authority over the County's Department of Public Health which manages the operation of the County's hospital, Arrowhead Regional Medical Center, and health clinics. Just this week, the Board handed the health department executives $4 million to hire replacement RNs during the strike, a commitment of resources that nurses say they have failed to see devoted to the regular RNs who work, live and devote their lives to caring for county patients.

The County’s lack of commitment to the nurses and patients is at the heart of the dispute. The California Nurses Association/National Nurses United which represents 1,250 San Bernardino County RNs cites a 30 percent wage gap for county RNs compared to the nearby private hospitals that has contributed to a serious drain of RNs who leave the county to work in other local hospitals. That disparity rises as high as 52 percent for some of the most experienced RNs.

County RNs will conclude their two day strike Thursday morning at 7 a.m. This morning, as the strike entered its second day, nurses were joined by Pastor Sherwin Leggett of Community Missionary Baptist Church, who led the nurses and supporters in a blessing.

"The strike has received wonderful support from the community because County residents recognize that nurses are out here to safeguard the care that they and their loved ones receive," said Lieu Vo, RN, ICU. "As nurses we take our role as patient advocates very seriously and we will continue to advocate until the County takes proactive steps to reverse the downward spiral in standards here and invest in quality care."

"With this strike nurses showed their unity and commitment to improve conditions for our patients," said Michelle Perry, who is an RN in the Medical Surgical Unit." Unfortunately, instead of investing in the recruitment and retention of experienced nursing staff, management decided to waste $4 million on temporary replacement workers. This really demonstrates how misplaced their priorities are. Now is the time for the Board of Supervisors to act to stop the erosion in the County's healthcare services," said Perry who has worked at ARMC for 7 years and is a resident of San Bernardino County.

Throughout the strike RNs have maintained a Patient Protection Task Force on the picket line available to provide emergency assistance to stabilize a patient if necessary.

The high attrition and turn over rate of experienced nurses particularly in the units that require specialized care has led directly to an erosion of care for county patients. For example, the County wants to require nurses to work in units far outside their area of clinical expertise, such as having maternity care RNs care for very different extremely ill cancer or intensive care patients. The County restricted this unsafe practice in the prior contract, but is now demanding this protection be eliminated to make up for inadequate staffing and high turnover.

“Recently graduated nurses, who find a first job with the county, and now make up 20 percent of the workforce, repeatedly move on to better standards at other hospitals. As a result, the county has essentially become a training center for the area’s private hospitals. Taxpayers are subsidizing the private sector hospitals by training the RNs for them,” said Toni Rodriguez, RN.

According to the county’s own data, there were 144 new hires in the past year, suggesting an 11.5 percent turnover rate, well above the statewide and Southern California average. The problem is especially pronounced in some of the most critical care units, such as surgical intensive care where 90 percent of the RNs are new.

Nurses have been in negotiations with the County for 14 months and have been working without a contract since June.