Sacramento Rally Welcomes Medicare for All Style Bill for All Californians 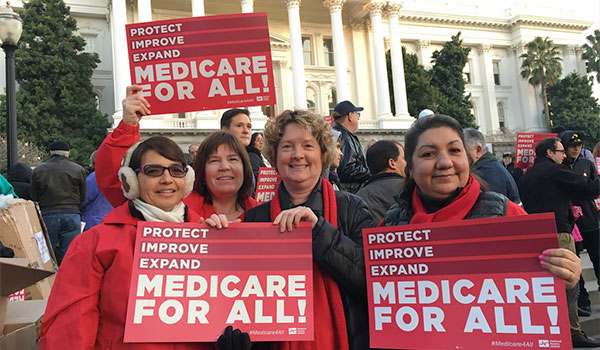 Hundreds of California nurses, and healthcare and community activists, will join with State Senators Ricardo Lara and Toni Atkins Wednesday, February 22 in Sacramento to celebrate the introduction of legislation to ensure universal health coverage with effective cost controls—a Medicare for all style bill for all California residents.

The rally will also celebrate the official launch of “Healthy California,” a campaign comprised of organizations including Campaign for a Healthy California, AllCare Alliance and Labor United for Universal Healthcare, that represent over 4 million Californians committed to guaranteeing healthcare for the residents of our state.

“At a time of critical disarray of our health care system, with the threatened repeal of the Affordable Care Act and increasing uncertainty over the future of healthcare coverage, services and costs, California can once again lead the nation,” said RoseAnn DeMoro, executive director of CNA and NNU. “This bill will set a standard in America and be a catalyst for the nation.”

DeMoro praised Lara and Atkins for bold leadership for California in introducing the Act.

SB 562 declares that it is “the intent of the Legislature to enact legislation that would establish a comprehensive universal single-payer health coverage program and a healthcare cost control system for the benefit of all residents of the state.”

In his statement Friday, Sen. Lara explained that, “Healthy California gives everyone insurance, because everyone has a right to healthcare. Trump and the Republicans don’t get to pick the healthcare winners and losers, and we’ll never get to 100% healthcare in California unless we lead.”

SB 562 sets the path to guarantee that all Californians have health coverage with genuine patient choice, no more out of control co-pays and deductibles, and an end to profiteering off the most sick and vulnerable Californians, notes CNA.

Even with significant gains the ACA, the law, SB 562 notes, “still leaves many Californians without coverage or with inadequate coverage,” while California individuals, workers, and employers have experienced rising costs, and increasingly restrictive insurance networks.

Full components of the plan will be discussed in full through the comprehensive California legislative process.

In the meantime, said DeMoro, “nurses, healthcare activists, and thousands of others energized by the Bernie Sanders campaign and others thirsting for genuine, progressive social change will campaign in communities and legislative districts across California to press the case for this fundamental reform.”

“There has been a seismic shift in our political system through grassroots activism; we have an inspired, motivated base that will make its voice heard,” DeMoro said.