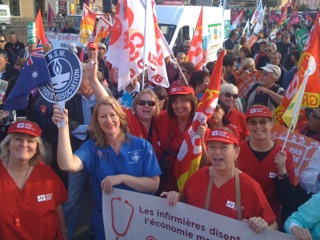 Thousands of Nurses, Activists to March at G8 May 18, Call for Tax on Wall Street, Challenge Austerity Agendas

RNs to be Joined by Healthcare, Community, Global Activists in Chicago to Call for Wall Street Speculation Tax as Starting Point to Address Economic Crisis


Nurses from across the U.S., joined by healthcare, labor and other community activists, as well as activists from G-8 nations, will hold a large march and rally Friday, May 18 to greet the G-8 summit of world leaders in Chicago, National Nurses United announced today.

NNU, the largest U.S. union and professional association of nurses, is sponsoring the march, scheduled to begin at 11 a.m. The marchers will travel along portions of Michigan Avenue, East Wacker Drive, and North State Street before ending at Daley Plaza for a noon rally.

A centerpiece of the action will be a call on world leaders to adopt a financial transaction tax (FTT) on major trading by banks and other financial institutions to raise revenue critically needed for revitalizing the economic health of the U.S. and other G-8 nations. Marchers will also challenge austerity programs that they say have eroded health and living standards for global working people.

Over the past year, NNU has sponsored large actions, calling on Congress to tax Wall Street with a robust FTT on the trading of stocks, bonds, currencies, derivatives, and other financial instruments that the nurses say could raise $350 billion every year. The funds would then be available for essential needs, such as creating jobs, and investing in healthcare, education, and housing.

International labor, environmental, anti-poverty, and other non-governmental organizations have similarly mounted substantial pressure on global leaders to adopt FTTs – often called the Robin Hood tax, especially in Great Britain. Events are moving quickly this year toward a European version of the FTT, and the French president and cabinet have proposed adopting a national FTT within a few months.

On November 3, nurses from four continents joined with a number of the global NGO and labor groups at the G-20 summit in France to press the case for national and continent wide FTTs. On the same day, NNU sponsored a rally of 3,000 nurses, along with labor, consumer, and Occupy Wall Street activists outside the White House and Treasury Department urging the Obama administration to support a meaningful tax on Wall Street.

The march and rally in Chicago is a continuation of the unity of those who came together in France and Washington. Additionally, the Chicago action, will include a Friday morning forum, open to the press on the fight against global austerity programs and attacks on public services featuring activists from around the world at the Sheraton Chicago Hotel and Towers.

“The banks, investment corporations, and other financial institutions plunged our economy into crisis by gambling with the savings, home mortgages, pensions, and futures of American families,” says NNU Co-president Karen Higgins, RN.

“Nurses have seen enough suffering from patients whose health has been broken by losing their jobs, their homes, and their health coverage. It’s time for action, starting with a tax on Wall Street speculation, which is currently untaxed, as a simple, but fair way to begin to raise the revenue needed to bring our nation and our economy back to health.”