RNs Say Anti-Worker Court Ruling Will Not Silence Their Voices to Act to Protect Patients, Communities 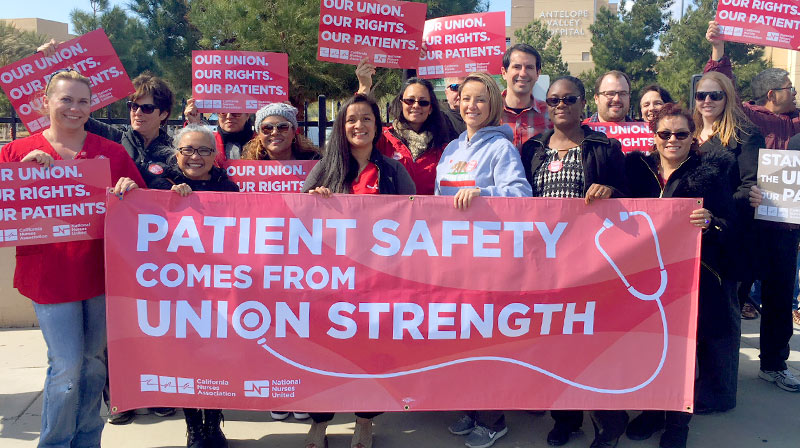 The Supreme Court decision today to roll back decades of union and worker rights in Janus v. AFSCME poses a significant threat to patient safety as well as worker and community health and economic standards, said National Nurses United, the nation’s largest union and professional association of registered nurses.

All Press Conferences are at 12:00 noon local time:

NNU is urging Congress to reverse the decision and support the Workplace Democracy Act, introduced by Sen. Bernie Sanders in the Senate and Rep. Mark Pocan in the House to strengthen the rights of workers to form unions – and for state legislators to also act to protect the rights of workers and unions.

Additionally, “we encourage all non-union workers to join strong unions to protect their rights to act collectively to advocate for themselves, their co-workers, and the public well being,” said NNU Co-President Deborah Burger, RN.

Janus, said Burger, is “a gift to billionaires, corporate executives and far right lobbying groups that have worked for years to destroy worker rights and unions. It also harms women and people of color who have historically had more economic opportunity in public workplaces in contrast to decades of discrimination by private employers.”

“But the architects of this decision have a far larger goal than just hamstringing public unions and workers,” said NNU Executive Director Bonnie Castillo, RN.

“They want to remove any opposition to their agenda of eliminating all protections on public health and safety, in healthcare, environmental pollution, clear air and water, food safety, and workplace standards, that they see as an impediment to their profits and authoritarian power,” said Castillo.

“That’s why they have targeted unions in both the public and private sector who with tens of millions of members are powerful voice for working people to unite to defend our communities and nation,” Castillo said.

“Nurses will never be silent in the face of this ruling, or in any other threat to our patients, our members, and our communities,” Castillo said.

Under a 1977 Supreme Court case, Abood v. Detroit Board of Education, workers represented by a union who object to the union’s political activity must either pay union dues or otherwise pay a fee to cover the cost of the union’s work to represent them for the cost of negotiating improvements in pay, benefits and working conditions.

Under Janus, the Court broke with that established law and court precedent to allow public workers to refuse to pay any dues or fees, even though unions are required to represent all employees covered under a union contract.

Nurses in public hospitals emphasize the difference with a collective union voice to advocate for patient safety and public protections.

“Budget cuts frequently threaten to close services that the community desperately needs,” said Martese Chism, a nurse at Chicago’s John H. Stroger Hospital. “When the system threatened to close pediatric services at Stroger, we came together with other public sector unions at County and fought to keep pediatrics open.”

“With our communities facing a serious opioid crisis, and public health emergencies, patients count on us to act on their behalf when care conditions are eroded, when staffing is unsafe, when decisions are based on budget goals, not patient need. That’s what this ruling threatens,” said San Bernardino County, CA Public Health RN Kimberly Amini.

“It’s the union that brings many safety laws in legislation and public regulatory protections,” says Maureen Dugan, RN, who works at the University of California San Francisco. “The attack on our union is an attack on our patients.”

In advance of the decision, NNU has been meeting with nurses who work in public health settings and encouraging them, with growing success, to work together to protect their collective, union voice to strengthen their ability to speak out for the safety of their patients and improved economic and workplace standards for their colleagues.

Janus is modeled after so-called “right to work” private sector laws in 28 states. In those states, median household incomes are $8,174 less than in non-right to work states, people under 65 are 46 percent more likely to be uninsured, infant mortality rates are 12 percent higher, and workplace deaths occur 49 percent more often.