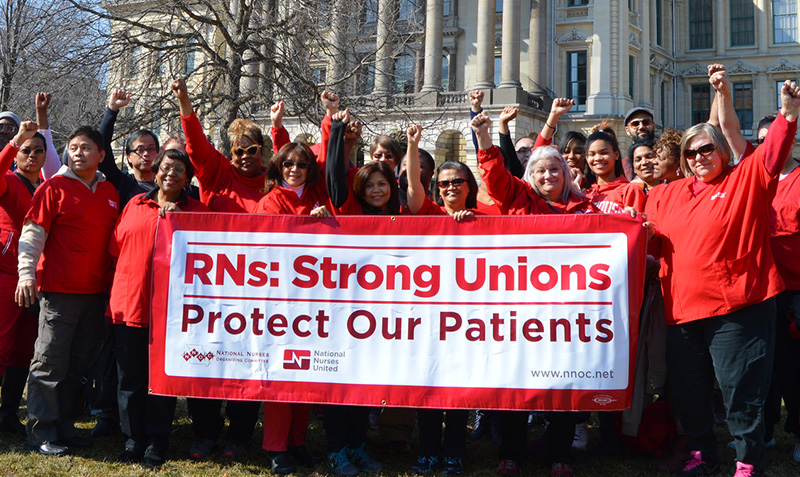 Registered nurses from across Illinois will gather in Springfield, Ill., Wednesday, Feb. 27, 2019 to encourage state legislators to cosponsor and support the Hospital Patient Protection Act, which mandates minimum nurse-to-patient ratios for every hospital unit at all times. RNs with National Nurses Organizing Committee/National Nurses United (NNOC/NNU) are urging lawmakers to sign on to this legislation that addresses a patient safety crisis as nurses are forced to care for an unsafe number of patients, compromising patient health and leading to preventable medical errors, avoidable complications, increased readmissions, and even death.

“Mandatory minimum nurse-to-patient ratios save lives,” said Talisa Harden, a registered nurse at the University of Chicago Medical Center. “As nurses, we’ve always known it, and now there is a robust body of peer-reviewed literature that proves it. Illinois patients deserve safe and therapeutic care no matter where they are admitted. This bill will make all Illinois patients safer.”

Rep. Theresa Mah is sponsoring House Bill 3585, and Rep. Will Guzzardi is a cosponsor, while Sen. Omar Aquino is sponsoring the senate version, Senate Bill 650, with Sen. Robert Peters cosponsoring.

Nurses will be making rounds to speak with legislators about this important patient safety care bill during their legislative action day.

Currently, there are no federal mandates regulating the number of patients a registered nurse can care for at one time at U.S. hospitals. California is the only state that has mandated nurse-to-patient ratios throughout all hospital units and studies have shown that these ratios save lives. A 2010 study found that New Jersey hospitals would have had a nearly 14 percent fewer deaths and Pennsylvania more than 10 percent fewer deaths if they had California’s nurse-to-patient ratios in medical-surgical units.

While the proposed Illinois legislation is modelled after the California mandates, it goes even farther to become a gold standard for ensuring patient safety.  The Illinois legislation would also mandate minimum staffing standards in long term acute-care hospitals and ambulatory surgery centers.

Safe staffing is also critical for the health and safety of nurses. A 2015 study in the International Archives of Occupational and Environmental Health showed that the California safe staffing law was associated with nearly 56 fewer occupational injuries and illnesses per 10,000 RNs per year, a value nearly 32 percent lower than the expected rate without the law.

“Nurses who have too many patients are vulnerable to higher rates of on-the-job injuries and are more prone to make errors,” said Theresa Ivery, a registered nurse at Jackson Park Hospital in Chicago. “Our bill will make our hospitals safer for both patients and nurses.”