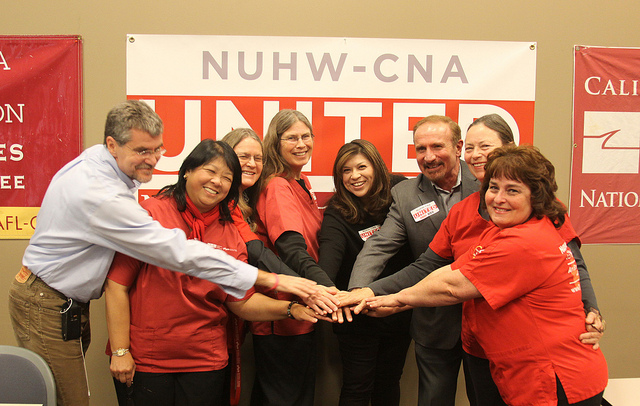 With escalating healthcare industry attacks on patient care protections and living standards for registered nurses and other hospital employees, often aided by a surrogate wearing a union label who cosponsored an effort to suspend California’s nurse-to-patient ratio law, the California Nurses Association/National Nurses United today announced the affiliation of the National Union of Healthcare Workers.

“Today we intend to send an unmistakable message to a callous hospital industry that nurses will not stand silent in the face of a ruthless drive by hospital employers or their collaborators to uproot decades of progress made by RNs and other healthcare workers,” said CNA Co-President Deborah Burger, RN.

The sharp uptick in concession demands by large hospital chains, such as Kaiser Permanente and Sutter Health, for sweeping reductions in health coverage, pensions, and workplace and economic standards -- while California hospitals made $4.4 billion in profits, collected more than $1.8 billion in government subsidies and benefits from their tax exempt status beyond what they provided in charity care, and gave out pay packages of over $1 million to some 100 hospital executives in 2010 alone -- coincides with broader attacks on unions and workers, as symbolized by the recent enactment of so-called right-to-work legislation in Michigan.

But, noted CNA, the assault has a unique character in California where United Healthcare West/SEIU President Dave Regan and his top managers have acted on behalf of big employers like Kaiser and Sutter, and the hospital industry lobby arm, the California Hospital Association.

Regan and his management circle have targeted safe care standards while acceding to unprecedented cuts in contract standards that have severely undermined the ability of nurses to defend patient safety and their own contract protections.

“For 25 years we have worked to strengthen the ability of RNs to deliver safe care, to enhance the professional practice of RNs, and to improve the ability of nurses to have safe working conditions, economic security, and the ability to retire in dignity. We will never accept reductions in quality of care and patient services for our communities, or cuts that reverse living standards for nurses, other workers, and our families,” said Burger.

“Nurses across California know our unparalleled record of fighting to protect their patient advocacy rights and professional practice, whether in standing up to aggressive employers, or winning improvements in legislation or regulation,” said Burger.

“With this affiliation, we are also sending a message to other hospital workers that our unity can advance the interests of all healthcare workers who face employer demands for cuts, or a union like UHW/SEIU that has failed them. Many UHW/SEIU members have already contacted CNA, as well as NUHW, seeking real representation,” said Zenei Cortez, RN, who chairs CNA’s Kaiser bargaining team and is also a CNA co-president. "Uniting together, CNA and NUHW are taking a huge step forward in achieving our joint goal of upholding standards for workers and patients."

Concurrently, in Kaiser, Regan and UHW managers have:

CNA and NUHW have opposed such unjustified cuts. CNA and NUHW members have walked off the job and onto the picket line together. This year, the National Labor Relations Board will schedule an election for 43,000 Kaiser workers who will decide whether to remain in UHW/SEIU or to join NUHW.

With the additional insult in Sutter of “me too” language that requires the employer to give back to UHW/SEIU any contract benefits defended or gained by CNA members, Regan’s actions have emboldened Sutter’s already hard line with RNs that has provoked a long contract dispute with the RNs.

At the same time, in addition to his attack on California’s landmark ratio law on behalf of CHA and the hospital industry in general, Regan also co-authored a CHA plan to tie health benefits to arbitrary lifestyle goals and penalize workers who don’t meet those goals with higher costs, regardless of chronic conditions or other health history.