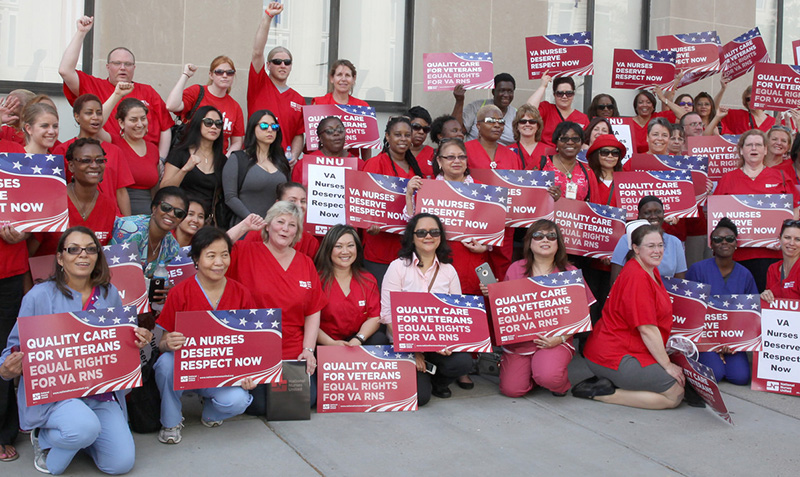 Tomorrow: RNs and Veterans Rally to Protect Veterans’ Health Care at the VA

49,000 Staff Vacancies - A Deliberate Attempt to Deprive the VA of Necessary Resources

RNs with National Nurses Organizing Committee/National Nurses United (NNOC/NNU) and veterans with San Diego Veterans for Peace are calling on the VA Secretary, Robert Wilkie, to fully fund and staff the VA, and reject the implementation of proposed rules that will divert billions of taxpayer dollars designated for the VA and veterans’ health care into the private sector. Furthermore, it is imperative that Wilkie restore union protections which allow nurses to advocate for safe patient care, said nurses.

“This administration is playing a dangerous and lethal game with the future health of veterans who have earned the right to the best health care, health care that the VA is uniquely qualified to give,” said Jim Brown, a member of San Diego Veterans for Peace who received a Purple Heart in connection with his service in the U.S. Marine Corps during the Vietnam War. “This administration, which bends to the will of a Koch brother funded organization and wealthy executives, is setting up the VA to fail, by deliberately refusing to fill 49,000 positions, and abandoning veterans to the private sector, known for its runaway pricing, it’s hard to navigate system and it’s unpredictable care.”

The VA is currently considering newly proposed rules to establish the conditions under which the VA would pay with public funds for veterans to be eligible for health care and mental health services in the private sector. The VA just released statistics showing that 49,000 staff positions remain vacant and nurses say this is a deliberate attempt to deprive the VA of much needed resources. Nurses say this administration is attempting to dismantle union protections, by unlawfully refusing to sign a negotiated and ratified contract and issuing executive orders designed to eviscerate collective bargaining rights.

According to the New York Times, VA officials say the percentage of veterans eligible for care in the private sector under the proposed rules would rise to between 20 and 30 percent, compared to 8 percent currently.

“This is an old and ugly game, starve a public resource, then declare it doesn’t work and push those dependent on that resource into the private sector, where that service is now offered with the private sector setting the price,” John Falchi, a member of San Diego Veterans for Peace. “We cannot allow this to happen to the VA, a public resource with an essential mission to care for our veterans. We need the VA to remain healthy, as a healthy VA equals healthy vets.”

A ProPublica report on the VA’s use of private sector care under the Choice program found that veterans waited longer for care than if they had used VA services, and the administrative overhead to move the veterans into private care cost nearly $2 billion.

“We know that the best place for our veterans to get care is at the VA, the only fully integrated health care system in the country and the only health care system designed specifically for veterans,” said Irma Westmoreland, RN and NNU board member. “Study after study has found the VA provides care that is equal to or superior than care in the private sector, and that VA care is less expensive. It stands to reason that patient outcomes are better, in part because of the VA’s expertise, and also because decisions about patient care are based on a patient’s medical needs, not by the bottom line.”

“National Nurses United will continue to fight for a fully staffed and fully funded VA, despite this administration’s repeated attacks on nurses’ union rights. Because we have taken such a public role in this fight against privatization of the VA, this administration is targeting NNU and has refused to sign a contract VA and union leaders took two years to negotiate,” said Bonnie Castillo, RN and executive director of National Nurses United. “But we have no intention of abandoning our fight for what is right, and a strong VA, with union-protected nurses who can advocate for their patients, is what is right for our veterans.”

Secretary Wilkie rejected the NNOC/NNU contract in October 2018, and NNU filed suit against Wilkie in November 2018. In the lawsuit, the nurses contended Wilkie acted illegally in a “deliberate campaign to eviscerate collective bargaining rights of the VA nurses.”