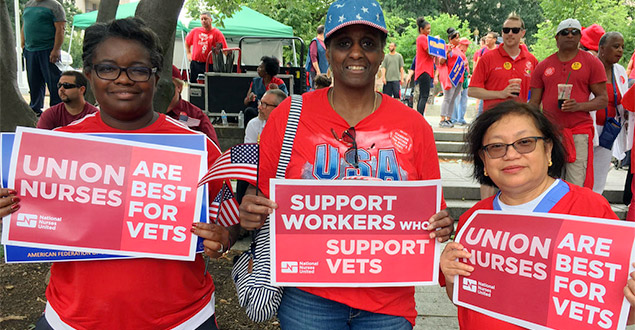 NNU, whose affiliate NNOC represents 11,000 RNs in 23 VA hospitals, is calling on supporters to contact their federal legislators to demand Wilkie reverse his decision.

“Wilkie’s unwillingness to sign the contract is yet another attack on workers’ rights and an attempt to dampen the collective voice of nurses as they advocate for the highest quality of care for the veterans who receive treatment at Veterans Affairs hospitals,” said NNU Co-President Jean Ross, RN.

“Nurses are dedicated to advocating for their patients, and they are best able to do so collectively through their union. This is especially critical when it comes to our service veterans who are best cared for by the experienced VA nurses and their expertise in caring for our veterans’ unique, specialized patient care needs,” said Ross

Secretary Wilkie disapproved the three-year contract agreement on October 19, even though the contract was rendered by a Federal Service Impasse Panel that had been brought in at the behest of the VA.

Secretary Wilkie made note of 357 objections in the contract, of those 267 were provisions included in the previous contract signed by former VA Secretary Eric Shinseki in 2012.

“We believe the VA secretary has gone beyond the intent of the law by simply voiding a contract that is based on precedent, was largely agreed upon by the VA's own negotiators, and determined in part by a federally appointed arbitrator,” said Irma Westmoreland, RN, chair of the VA for NNOC/NNU.

The rejection of the contract comes as NNOC/NNU and other union workers are working to stave off efforts to privatize the VA and fight back against other Trump administration attacks on unions.

In June, President Trump signed into law the MISSION Act, which creates a permanent program designed to refer VA patients to private providers that NNU has strongly criticized. This push to privatize veterans care is loudly promoted by those who would stand to make a profit off veterans’ health care.

Those promoting privatization, including Koch network funded organizations and legislators, says NNU, are deliberately ignoring a wide body of evidence which finds the VA provides equal or superior care when compared to the private sector, and it does so at a lower cost.

Some of those intent on seeing the VA privatized, were unveiled this summer when ProPublica reported on the “Mar-a-Lago council,” a group of wealthy businessmen who were helping the Trump administration shape VA policy.

Earlier this summer, the President issued a set of executive orders that sought to strip federal employees of their hard won-union rights. His move was later overturned in court.

In the decision, U.S. District Judge Kentanji Brown Jackson wrote the President is not authorized to issue executive orders that “eviscerate the right to bargain collectively as envisioned” by the federal labor-management relations statute. In September, the Trump administration appealed the ruling.

NNU intends to file an appeal of the disapproval of the contract with the Federal Labor Relation Authority (FLRA) within the week.