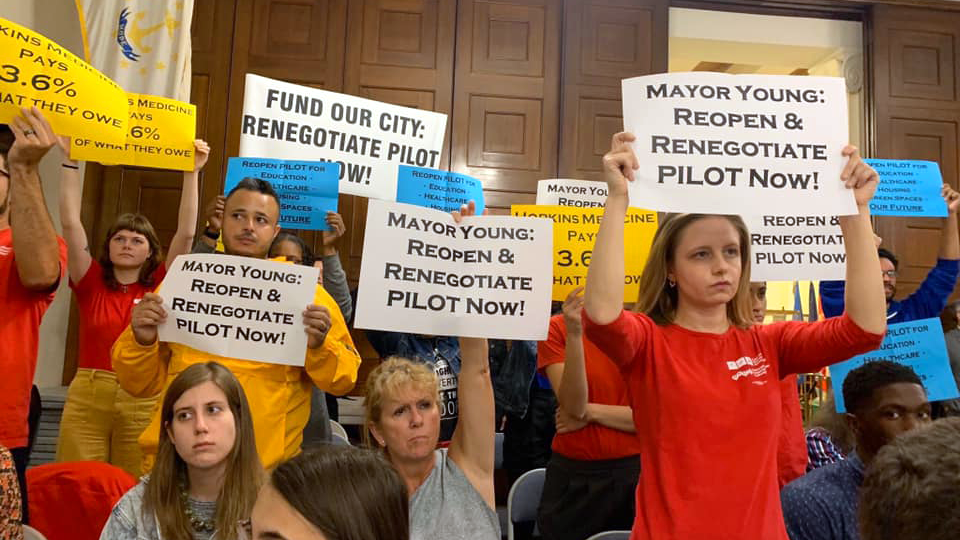 “One of the most effective steps Baltimore can take to rectify the tremendous shortfalls in funding education in this city is to reopen and renegotiate Baltimore’s current tax agreement with the major non-profits.”

The Coalition for a Humane Hopkins will hold a rally in front of City Hall Thursday, Dec. 19, calling on Mayor Young to reopen and renegotiate the city’s 2016 “Non-profit Assessment Agreement” with 15 of Baltimore’s major non-profit hospitals, colleges and universities, including Johns Hopkins Hospital and the University of Maryland Medical Center. The deal was originally negotiated by Mayor Stephanie Rawlings-Blake, mayor of Baltimore from 2010-2016.

Right after the rally the City Council is holding a Committee of the Whole Informational Hearing focused on the city’s PILOT agreement and its possible renegotiation. The city is under tremendous pressure to identify new funding for a number of expenses including its share of new investment in public education proposed by the Kirwan Commission.

“One of the most effective steps Baltimore can take to rectify the tremendous shortfalls in funding education in this city is to reopen and renegotiate Baltimore’s current tax agreement with the major non-profits,” said Baltimore Teachers Union President, Diamonté Brown. “These institutions absolutely can and must contribute more to ensure a brighter future for our children and our city.”

“The city must stop allowing institutions like Johns Hopkins to displace its people and cannibalize its neighborhoods. As Baltimore residents, we are shocked and angered to discover that as working poor we pay higher rents and property taxes to offset what a terrible neighbor like Hopkins refuses to pay,” said Terrel Askew, a member of the Fair Development Roundtable and United Workers. “Why does the city give huge tax subsidies to institutions like Hopkins when they aggressively hunt down struggling patients and sue them for medical debt, and spend massive amounts of money on union busting to stop nurses from exercising their right to have a union?  It’s time for the city to reopen the PILOT agreement and make them pay their fair share. This is one step the city can take to end the war on Baltimore’s poor, and work toward building a healthier present and a more equitable future,” said Askew who will speak out at the rally and hearing.

A recently published report, “Burdening Baltimore: How Johns Hopkins Hospital and Other Not-for-Profit Hospitals, Colleges and Universities Fail to Pay their Fair Share,” provides a detailed analysis of the 2016 Non-profit Assessment Agreement. The report, published by National Nurses United, notes that the methodology determining how much each Baltimore not-for-profit contributes to the combined annual sum of $6 million is not spelled out in the agreement. Nor does the agreement include any justification for the fact that the amount paid by Johns Hopkins Hospital, and Johns Hopkins Bayview Medical Center, constitutes the second to smallest percentage relative to the annual value of their tax exemptions, when compared with the other non-profits covered by the agreement.

The report concludes that the ten-year agreement “reflects poor fiscal management on the part of the city,” and in light of the “corrupting influence of large not-for-profit organizations like the University of Maryland,” revealed by the former Mayor’s Healthy Holly scandal, the agreement should be reopened and renegotiated.

In October the Coalition for a Humane Hopkins delivered a letter to Mayor Young stating that renegotiating the 2016 Payment in Lieu of Taxes (PILOT) agreement with Baltimore’s medical and academic institutions would help provide “much-needed resources for the services our city so desperately needs. These needs are currently being met, as best as possible, by our organizations and community. The tax burden-most egregiously left by Johns Hopkins entities, is currently falling on homeowners, renters, and small organizations doing our best to get by.” The letter notes that Baltimore’s property tax rate of $2.248 per $100 in assessed value is by far the highest in the state of Maryland, at 222% of the state average.

The letter to Mayor Young was signed by: