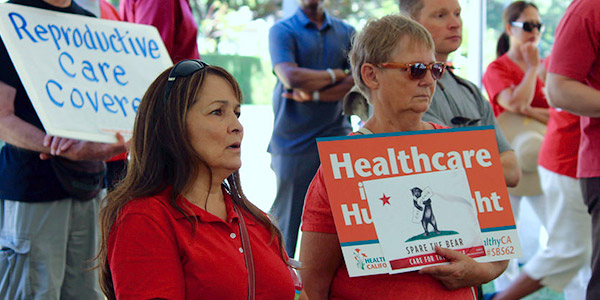 Residents of Assembly Speaker Anthony Rendon’s own district oppose his decision to block legislative action on a critical bill to guarantee health coverage for all Californians.

That is according to a survey of 400 likely 2018 voters in Rendon’s 63rd Assembly district conducted August 16 to 20. GBA (Gerstein/Bocian/Agne) Strategies, a prominent, Democratic-aligned Washington DC polling firm, conducted the phone survey, to both landlines and cell phones, for the California Nurses Association (CNA).

Speaker Rendon acted unilaterally to block Assembly hearings on SB 562, a bill to guarantee health coverage to all Californians and eliminate premiums, deductibles and other out of pocket health costs, after the bill passed the California Senate in June.

In seeking to justify his decision, Rendon staff and supporters have asserted that his district stands with him. The poll findings tell a different story.

When presented with arguments both for and against whether Rendon should have allowed the legislative process to proceed on SB 562, poll respondents disagreed with his decision by a 48 to 37 percent margin.

Key blocks of voters were especially critical. By a 16 percent margin, 52 to 36 percent, Hispanic residents said Rendon was “wrong not to call a vote” on the bill. Similar margins were found among Democrats, 55 to 32 percent, and union households, 53 to 35 percent.

Further, 41 percent of the AD 63 residents contacted said his decision would make them less likely “to vote for him” when Rendon is “on the ballot for re-election again next year,” compared to only 17 percent who said they’d be more likely to vote for him. A full 81 percent said they are “almost certain” to vote in November 2018.

The differences were even greater among Democrats, 47 percent less likely to just 13 percent more likely. Among self-described liberals, 60 percent were less likely.

Despite his high profile as Speaker of the California Assembly, just 34 percent of the respondents knew who Rendon is, in contrast to 97 percent name recognition for President Trump, 91 percent for Governor Brown, and 72 percent for CNA.

(Those findings coincide with a canvass in Rendon’s this past weekend by volunteers with CNA, Our Revolution, the Healthy California Campaign #KnockEveryDoor. Not one respondent knew Rendon, and many cited concerns about access to healthcare or spiraling costs that would be addressed by SB 562.)

Fully half of those surveyed described themselves as Hispanic or Latino, 24 percent African-American, and 24 percent white. More than a third, 37 percent, were over age 60; 31 percent self-described as conservative compared to 28 percent as liberal.