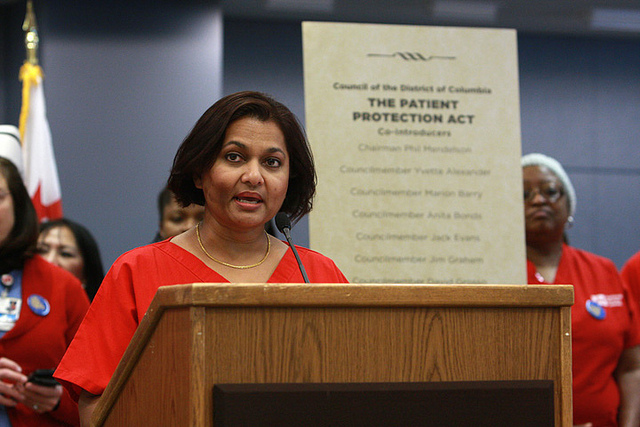 Registered nurses joined with District of Columbia Council members and community supporters in a press conference today to announce the introduction of the Patient Protection Act to dramatically improve care in DC hospitals to protect patients.

Speaking to a room packed with some 200 DC RNs, Council Chairman Phil Mendelson called the bill “common sense, today’s version of the 8-hour day.” It is intended, he said, to address “the short change of healthcare due to the bottom line, ensure an adequate number of nurses on duty and eliminate (nurse) burnout.”

Opening the press conference, Washington Hospital Center RN Rajini Raj explained the bill would establish mandatory minimum nurse-to-patient ratios by hospital unit, augmented by additional staffing based on individual patient needs. It is “modeled on a successful California law that has dramatically improved patient safety, brought 130,000 additional nurses back to the bedside, and has helped keep experienced nurses taking care of patients.”

The Patient Protection Act, Mendelson emphasized, “provides a minimum number of nurses on duty by specific unit at all times"

The bill is prompted in part by an autumn 2012 NNU survey of DC area nurses which found:

“All the time I hear from nurses working at hospitals across the District that they are forced to run between too many patients,” said Margaret Shanks, RN at Children’s National Medical Center and president of the District of Columbia Nurses Association/National Nurses United.

“In the neonatal intensive care unit (at Children’s) the patient load has been increased on many occasions by 50%,” Shanks said. “It means that our youngest, most vulnerable babies sometimes just don’t get the care they need.  This can lead to unnecessary suffering for the babies and readmissions that drive up costs. I became a nurse to save lives and comfort the sick. And when those babies and their parents need a nurse, we should be able to be there.”

Mendelson will introduce the legislation together with Health Committee Chairwoman Yvette Alexander and seven other Council members at the request of NNU, the nation’s largest organization of nurses, which represents thousands of nurses who work at DC hospitals. In addition to nurse-to-patient ratios, the bill includes whistleblower  protection for RNs and other healthcare workers who report unsafe conditions and a  ban on mandatory overtime for RNs, a dangerous practice that can lead to medical errors.

Bonnie Linen-Carroll, an operating room RN at Washington Hospital Center, said “I have seen first-hand patients brought into the operating room unprepared for what they’re about to face because nurses in other units were short-staffed.” She also described short staffing in labor and delivery and the emergency room.

“It is a disgrace that this happens in hospitals in the capital of the richest nation in the world—but it doesn’t have to be this way,” said Linen-Carroll. “While there are plenty of qualified nurses in the metro area, hospital executives who care more about the short-term bottom line refuse to hire a sufficient number to care for the number of patients and deal with the high acuity—that is, the level of illness— of those patients. Having well-trained, experienced and sufficient numbers of registered nurses working in our hospitals is absolutely vital to the care that every patient receives.”

"You want the best care possible.  Patient Protection Act will do that," Council member Yvette Alexander said. "We appreciate you, we admire you, we respect what you do."