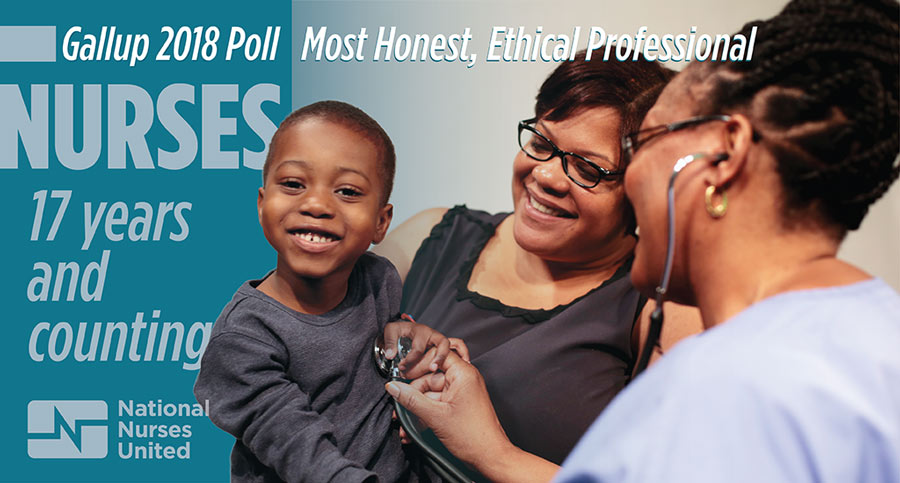 Nurses topped the 2018 Gallup Poll ranking of how Americans view 20 major professions, with 84% of the public, four in five Americans, rating their honesty and ethical standards as "high" or "very high." Nurses have ranked first for 17 consecutive years and every year except for one in the 20 years that Gallup has surveyed public opinion on the honesty and ethical standards of various occupations.

“This year’s poll once again shows that our patients, their families, and the public know that they can always count on nurses to stand up for them,” said Jean Ross, RN and Co-President of National Nurses United (NNU). “We witness the challenges our patients face and care for them at their most vulnerable. We are honored to play the role we do as patient advocates.”

“We know that to provide our patients with safe patient care, our advocacy must encompass union organizing and the legislative arena,” said Zenei Cortez, RN and Co-President of National Nurses United (NNU). “Our health care system is shaped by for-profit industries that are focused on the bottom line. They make money off of our patient’s suffering by delaying, denying and rationing care. Nurses are focused on what’s best for our patients; safe, quality care regardless of income, immigration or insurance status.”

In the coming year, NNU members are ramping up the Nurses Campaign to Win Medicare for All, with the introduction of new legislation in 2019. The campaign will continue to champion state bills, and expand the grassroots mobilization of constituents across the country, starting with Medicare for All barnstorms in early February.

"A growing majority of Americans support improved, expanded Medicare for All because they know it works,” said, RN and NNU Co-President Jean Ross. “The nurses will stand up, show up, and speak up until the broken U.S. healthcare system is profoundly transformed. We will not settle for band aid-fixes. We want the real deal, comprehensive medical care for all, regardless of ability to pay.”

NNU members have also continued to speak out for environmental justice and called on policy makers to seriously address the climate crisis. Nurses have seen firsthand the grave consequences of this crisis as volunteers participating in medical missions to communities devastated by hurricanes and wildfires. This year, NNU’s Registered Nurse Response Network (RNRN), sent volunteers to Florida in the wake of Hurricane Michael, to Guatemalan communities devastated by the Volcán de Fuego eruption, and to Butte County, California, following the destructive Camp Fire.

Photos from RNRN medical missions linked below can be used with attribution: