Nurses Welcome Defeat of Flawed Health Bill, Real Fix of ACA Would Be Medicare For All, Say RNs 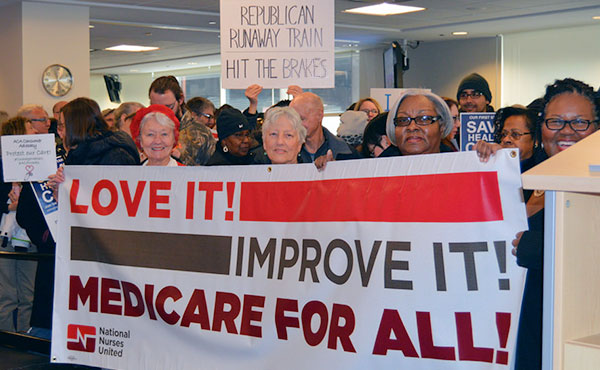 National Nurses United hailed the decision of House Republican leaders to abandon their fatally flawed bill to repeal and replace the Affordable Care Act with legislation that would be far worse – throwing 24 million people off health coverage and driving up costs for millions more.

“The proposed bill was a disgraceful attempt to implement a massive tax cut for the wealthiest Americans and big corporations under the guise of health care ‘reform’ while eviscerating vital protections for tens of millions of people,” said NNU Executive Director RoseAnn DeMoro.

“The Ryan health care bill was a declaration of war on our own people, on behalf of the elite of the elite. The only ‘health’ in this bill was for corporate profits and billionaire bank accounts.”

“But, the leadership of the Democratic Party also has earned some responsibility for this fiasco,” DeMoro continued. “Many of the criticisms of the ACA are, in fact valid. For all the improvements under the ACA, primarily the expansion of Medicaid and crackdown on some insurance abuses, the ACA still left 28 million without health coverage, and millions more struggling with un-payable medical bills and escalating out of pocket costs.”

“Where the Democrats too fell short was their failure in drafting the ACA to refute the underlying source of the health care crisis in the first place, the contradiction between a health care system that should be based on patient need and the public health and well being, and the insatiable demand of health care corporations for profits first.

“Thus, instead of enacting a genuine transformation of our flawed healthcare system when Democrats had the White House and bigger majorities in Congress than the Republicans have now, they failed to enact a national system, like an improved Medicare for all, that would guarantee healthcare for all Americans, with real patient choice, and effective cost controls.

“Why the Ryan bill ultimately failed is its premise that throwing more people to the wolves of the health care market would undeniably exacerbate the crisis for the people left behind by the gaps in the ACA. And they had to confront a massive rebellion by people in every corner, in every Congressional district across the nation.

“What policy makers should do now is learn the lesson that most of the rest of the world has discovered, implement a system based on care, not profits, not corporate insurance.  As the town halls and massive protests have made clear, the people are ready for real reform and a change in national priorities that puts our health first, not last,” DeMoro concluded.