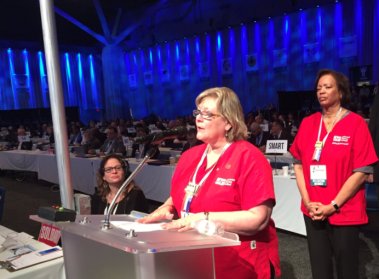 National Nurses United today hailed adoption of a resolution by the AFL-CIO at its convention in St. Louis, declaring that “we will support legislation that guarantees health care as a human right through an improved Medicare for All.”

Adopted by unanimous vote, the resolution said the Medicare for all system “must guarantee everyone can get the health services they need without exclusions or financial barriers to care.” To achieve that, we will engage with all affiliate bodies and constituency groups to win. . . Medicare for All.

Speaking in support of the AFL-CIO resolution NNU Co-President Jean Ross, RN, noted that up to 90 percent of workers on strike across the country were on the picket lines because of health care benefit issues. "We can’t keep giving up our raises to insurance company profits,” she said.

“Every poll shows strong majority support for Medicare for all,” said Ross, including among Democrats, independents, and a plurality of Republicans, 52 percent of Trump voters who earn less than $30,000 per year support a federal guarantee of healthcare. To end the healthcare disparities that afflict our country based on race and class, we need a system of everybody in, nobody out, with a single standard of care.”

Vermont State Labor Council President Jill Charbonneau praised the work of Sen. Sanders in introducing S. 1804, and the work he has done for single payer healthcare for many years.

Yvonne Williams, representing ATU, reiterated the importance for unions and workers winning Medicare for all, to allow us in collective bargaining to focus on other critical issues “and remove a giant sledge hammer management holds over all of our heads.” Sen. Sanders campaign for Medicare for all, was “the reason ATU backed Sen. Sanders” for President in 2016, she said.

APWU’s Judy Beard noted that “today we have more people in Congress with us on this issue.” She praised Rep. John Conyers for his role in sponsoring a House single payer bill, HR 676, for many years, now supported by a majority of House Democrats, as well as Sen. Sanders S 1804. “In Detroit, we have a saying, lead, follow or get out of the way. We need to replace for-profit insurance companies with a public, universal healthcare plan.”

NNU Secretary Treasurer Martha Kuhl, RN noted how “every day at the bedside, nurses see the impacts of a private insurance-based healthcare industry that denies care and diverts resources away from patients to profits. We must guarantee healthcare as a human right. We spend more and get less than any other industrialized country; we live shorter lives and higher rates of infant and maternal deaths.”

NNU, said Kuhl, “is organizing with allies in states across the U.S., especially in California for SB 562 (a state-based single payer bill) and for S. 1804.”

IFPTE President Greg Junemann said our care “must not be based on the fine print of insurance companies, with the best care only available to the filthy rich.”

“We need to pass this resolution and be on the side of all our people and be for healthcare for all,” said Erin McKee, president of the South Carolina AFL-CIO.

Sandy Falwell, RN, an NNU vice president, brought the 1,000 AFL-CIO delegates and guests to silence recounting the story of a premature child in her hospital she cared for whose parents had to get a second mortgage on their house, could not afford to maintain needed after care after taking their baby home, and ultimately had to bring him back to the hospital, tragically too late.

“As nurses, we see this every day. We see families who have insurance and can’t afford to pay for their medications and after care. Why can’t the U.S. do this?” Falwell asked.

Also speaking for the resolution were Art Pulaski, president of the California Labor Federation AFL-CIO, and Clyde Rivers of CSEA.

The AFl-CIO resolution also calls for “retaining a role for workers’ health plans, and retaining the Department of Veterans Affairs health care system as the “primary direct provider of fully integrated care to veterans.”