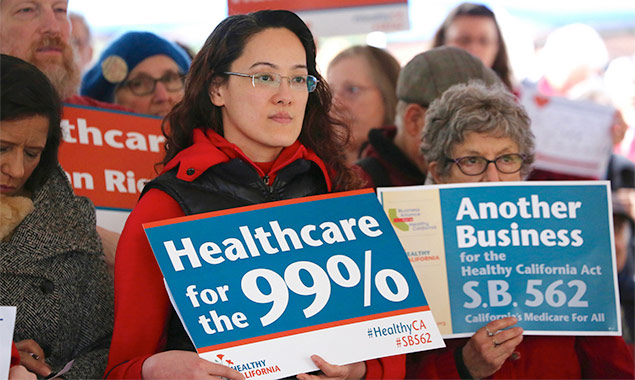 The California Nurses Association/National Nurses United (CNA/NNU) today again condemned public statements by gubernatorial candidate Antonio Villaraigosa for politically motivated distortions and fear mongering about critical legislation, SB 562, that would deliver full health coverage for all Californians, without the devastating deductibles and co-pays that prompt many to ration needed care.

In advance of the latest candidates’ forum Thursday night, Villaraigosa issued a public statement that “is disgracefully intended to alarm seniors about their Medicare coverage and again spreads mistruths about the cost of guaranteeing health care for the 15 million Californians who currently have no health coverage, or pay for insurance they can’t use due to the high out of pocket cost,” said CNA Co-President Deborah Burger, RN.

Burger also condemned Villaraigosa’s “dishonest attack on nurses” in his statement, a “reminder of the failed campaign by 2010 GOP candidate Meg Whitman who thought she could further her flawed campaign by engaging in attacks against registered nurses.”

1. That SB 562 “would strip Medicare patients of their current coverage.”  A “blatant lie that has no purpose other than to terrify seniors that they will lose access to care when they need it the most,” Burger noted. “Villaraigosa’s efforts to exploit seniors to advance his political career are a new low in California politics.”

The facts are that SB 562 strengthens Medicare. It eliminates the co-pays seniors currently pay, and covers prescription drugs, while preserving the rest of Medicare. Moreover, to contain prices, SB 562 would establish Medicare rates as a reasonable amount of reimbursement for providers.

2. That SB 562 would cost an additional $200 billion – a “wildly inflated claim that bears no correlation to reality,” said Burger.

California currently spends some $368 billion on health care, while leaving millions uninsured or under insured. A single payer system, as proposed in SB 562, would produce savings of 18 percent in the system through slashing private insurance administrative waste, the use of the state’s bulk purchasing power to cut drug costs, and other savings.

The cost of extending coverage to those not insured now, and guaranteeing that those who skip medical treatment due to the inflated high costs can get the care they need would be some $100 billion, which could be covered by additional revenues that, under a CNA proposal, would result in virtually every California business and family spending less on health care than they do now.

3. Stating that the Trump Administration and Republican controlled Congress won’t grant a waiver on use of federal funds for California. “There is a precedent for waivers, other states have received them. For a candidate who asserts he will stand up to Trump to abandon a fight on behalf of California’s health and safety provides little reassurance of the leadership we need in Sacramento,” Burger said.

4. Claiming “admitted their proposal was incomplete when passed by the State Senate” and implying that CNA is responsible for “death threats” against Assembly Speaker Anthony Rendon, a “disgraceful act of character assassination,” said Burger.

The facts are, Burger noted, that CNA presented the legislature with a comprehensive economic analysis of the SB 562, and pledged to work with the Assembly on its normal legislative process, including submitting 17 proposed amendments requested by Rendon’s healthcare consultant.

“Yet the Speaker, presumably at the request of his healthcare industry donors, chose to prevent public hearings and amendments, therefore abandoning the healthcare needs of the millions of Californians left behind in a broken and dysfunctional system” Burger said.

Villaraigosa, she continued, “purports to be an advocate of universal healthcare and single payer “my entire life” – yet attacks the only proposal for universal, single payer before state legislators, and has no plan of his own to deal with the very real crisis faced by millions of Californians – and the threat of worse to come with attacks emanating from the Trump Administration and Congress.”

“It’s time for Villaraigosa to stop playing politics with the health and safety of California patients and families, and actually work with nurses and the public to pass SB 562 now,” Burger said.