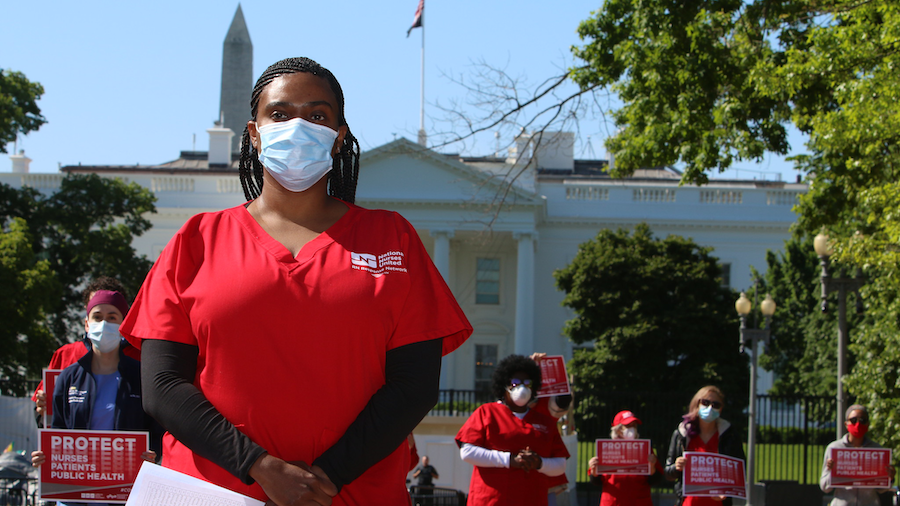 National Nurses United (NNU) today condemned President Trump’s campaign to subvert the November election with its attacks on the U.S. Postal Service (USPS) as “an assault on public health and postal workers, with a disproportionate racist impact on Black workers and on veterans – as well as a direct threat to democracy.”

“The orchestrated slowdown of mail delivery caused by Trump’s blocking of emergency funds for the Postal Service, the policies of the new Postmaster General Louis DeJoy, and the open effort to delay the mailing and counting of ballots are intended to hijack the November election,” said NNU Executive Director Bonnie Castillo, RN.

“On public health, the slowdown in mail deliveries, has had an immediate adverse impact on the health and safety of countless people who, especially in a pandemic, depend on the mail service to receive essential medications,” noted NNU President Zenei Cortez, RN. “These delays can prompt severe harm for patients recovering from injuries or surgery, exacerbate chronic health conditions, and cause permanent injury, and even death.”

The Philadelphia Inquirer has reported residents waiting three weeks for needed prescription drugs that they had formerly received in just a few days.

NNU is especially concerned with the reported delivery delays, Cortez emphasized. “The consequences can be devastating. It’s an exclamation point on the callous disregard President Trump has demonstrated for public health and safety with his disastrous, failed response to the coronavirus pandemic.”

“Delays in mail delivery also accelerate the humanitarian crisis for millions of American families caused by the economic collapse. These Americans rely on the USPS to receive paychecks or other income, as well as bills, which when not paid on time, can result in loss of housing, electricity, water and other basic needs,” Cortez added.

Castillo also voiced strong support for the nation’s postal workers. These workers have been hard hit by reduced work hours, loss of overtime, a hiring freeze, short staffing, and other tactics which have also resulted in the growing delays in mail service and the current threats by the USPS that mail ballots will not be delivered in time to be counted in the election.

“We are outraged at this attack on frontline workers who have for months placed their health and safety at risk by continuing to deliver mail in the face of a dangerous pandemic, and now they have been targeted with rollbacks for solely partisan purposes,” Castillo said.

Additionally, she noted, “the attack reinforces structural racism. Black and other workers of color, as well as women, are disproportionately harmed by the attack on the Postal Service. Black, Latinx, Asian, Indigenous workers, and women comprise 40 percent of the postal workforce. The Postal Service has long provided more opportunity for employment for Black and other workers of color in contrast with racial discrimination in the private sector.”

“Veterans are also unfairly affected,” Cortez noted. “Veterans make up one-fourth of postal workers and they are harmed by delays in receipt of their needed medications. Furthermore, active service personnel will be harmed by President Trump’s and DeJoy’s scheme to delay delivery of ballots and the threat to block counting of ballots, as most of these active service personnel depend on mail delivery to exercise their franchise.”

“The President’s highly public attack on mail balloting, defunding of the USPS, and the multiple maneuvers to delay the mailing of ballots, with the expectation that tens of millions would not be returned in time to be counted, should be a red alert to every American who values the principle of democracy and fair elections,” said Cortez.

“In the history of this nation,” Castillo concluded, “we have never seen a more blatant, open attempt to steal a Presidential election with millions of patients, workers, and veterans as collateral damage to this disgraceful raid on our valuable Postal Service. It is up to all of us to expose and stop this unconscionable behavior.”