"The nurses’ values of caring, compassion and community guide us to fight for public health and safety at the bedside, and also out in the world.” 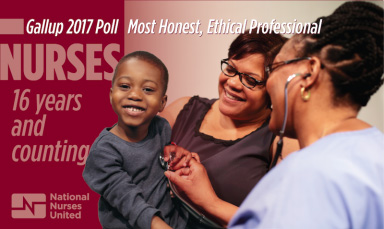 Nurses once again topped the Gallup Poll's annual ranking of how Americans view 22 major professions with 82% of the public rating their honesty and ethical standards as "high" or "very high." Nurses have ranked first for 16 consecutive years and every year except for one in the 19 years that Gallup has surveyed public opinion on what profession is most trusted.

“Nurses are duty bound to advocate for our patients, and we know, year after year, when it is reflected that we are the most trusted profession—that our patients, their families and the public can feel the depth of our commitment,” said Jean Ross, RN and Co-President of National Nurses United (NNU). “We will always stand up for our patients.”

“Nurses know that the conditions our patients suffer from at the bedside are often the end result of illnesses and injuries that begin elsewhere, in their everyday lives,” said Roseann DeMoro, Executive Director of NNU. “So the nurses’ values of caring, compassion and community guide us to fight for public health and safety at the bedside, and also out in the world.”

To that end, in 2017, National Nurses United members have led the fight for single payer, guaranteed Medicare for all—championing bills in several states, including California’s seminal fight for S.B. 562, the Healthy California Act.

"Medicare has a proven track record, it works, and it should be expanded, so that everyone in our nation has guaranteed access to quality care, regardless of ability to pay. The nurses will stand up, show up, and speak up until the broken U.S. healthcare system stops putting profits above patient care,” said Deborah Burger, RN and Co-President of NNU.

“We know the public relies on nurses to hold our elected officials accountable for doing the right thing. When single payer bills are introduced, legislators have to follow through on their commitment to their constituents, our patients—and actually vote for them!”

This past year also saw NNU members standing up stronger than ever to speak out on climate crisis—especially given the resulting severity and frequency of disasters, such as Hurricanes Harvey, Irma and Maria, as well as the wildfires along the west coast.

NNU’s disaster response program, the RN Response Network, sent nurses to provide first aid in Houston, in late August/September and to Puerto Rico in October, after deadly hurricanes. Upon returning home, the Puerto Rico nurse volunteers continued their patient advocacy by testifying to Congress regarding the lack of federal government response they had witnessed in Puerto Rico—and the deadly health conditions faced by patients there.

“We are so proud of our brave nurses who left their own homes and families to go help patients and their RN colleagues in other states and countries,” said Bonnie Castillo, RN, Associate Executive Director of NNU and Director of RN Response Network. “And we are doubly proud that these working bedside nurses came back from the nightmarish conditions they had witnessed in Puerto Rico—and took it upon themselves to speak out at the highest levels of power, to hold our representatives accountable for not leaving the people of Puerto Rico to die.”

National Nurses United is the largest and fastest growing union of registered nurses in the US with more than 150,000 members nationwide. NNU plays a leadership role in safeguarding the health and safety of patients and RNs and has won landmark legislation