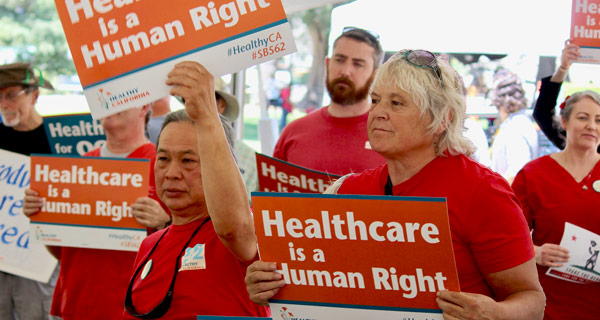 The California Nurses Association/National Nurses United issued the following statement in response to the announcement by Assembly Speaker Anthony Rendon’s appointment of an Assembly Select Committee to “develop plans for achieving universal health care in California.”

California does not need a Select Committee to hold hearings to develop a plan for achieving universal healthcare in California.  This announcement today is a reflection of the pressure on the Assembly to act in response to organizing by thousands of Californians across the state who have made the case for real action on transformative single payer healthcare reform.

Speaker Rendon also has an “oath” he took as a legislator, that he references in his statement. That oath is to do his job. The Assembly has had the ability since June 1 to hold hearings and make amendments to a bill passed by the Senate that would have set us on an immediate path to achieve the actual goals, including to “produce real results” that Speaker Rendon now asserts he wants to accomplish.

By unilaterally subverting and sabotaging the democratic process, Speaker Rendon violated that oath, and delayed the immediate and urgent relief that 15 million Californians who remain uninsured or struggling to meet un-payable medical bills endure every day.

Nurses have serious concerns that the decision to avoid an actual single payer bill with a Select Committee is an effort to promote insurance industry alternatives to single payer that will do little to address the substantial shortfall that exists for patients in the present system.

CNA will continue its current efforts to press for the Assembly to resume its constitutional obligation to consider legislation – in this case SB 562.

Nurses and healthcare activists have been conducting district visits with Assembly members and knocking on doors in Assembly districts to urge Assembly members to support the bill and call on Speaker Rendon to resume the legislative process by holding hearings and considering amendments to SB 562. That campaign will continue.

Finally, CNA representatives will, of course, participate in any hearings that are held on the vital topic of enacting genuine “health care for all” that can only be achieved with a Medicare for all type systemic reform as proposed in SB 562.