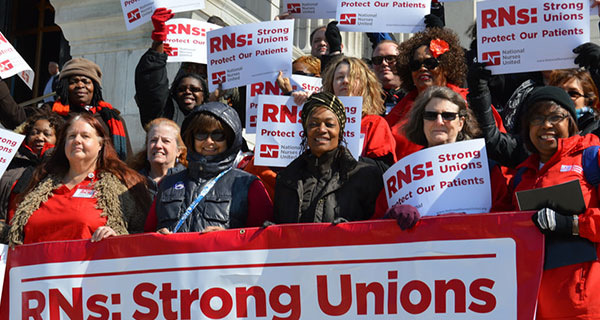 On Wednesday, February 8, registered nurse members of National Nurses Organizing Committee-Nevada/National Nurses United (NNOC/NNU) will appear before Nevada’s Committee on Commerce and Labor to speak out against AB 18, “Ratification of the Nurse Licensure Compact”—legislation which would allow nurses in a multi-state compact to share a single license across state lines.

“This bill is intended to reduce patient protections by requiring Nevada and other states that are part of the Compact to accept the lowest common denominator for nurse licensure from the least regulated state. The last thing our patients need is to be subject to a race to the bottom,” said Tamara Erickson, RN, of Reno. “Our current protections, through the Nevada Board of Nursing (BON), can become diluted when we try to combine them with other states, which may not have the same standards. Nevada patients and nurses deserve better.”

WHAT: RNs Appear at Committee on Commerce and Labor Hearing To Testify Against AB 18 (Ratifies Nurse Licensure Compact)

The following are issues of concern to NNOC/NNU nurses:

“Given the substantial concerns, we strongly oppose this bill,” said Elizabeth Bickle, RN, of Las Vegas. “We’re deeply concerned that a Nurse Licensure Compact would be detrimental to advocating for and ensuring the appropriate nursing resources necessary to meet the healthcare needs of the citizens of Nevada.”