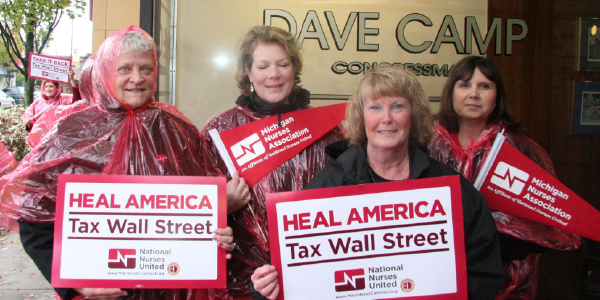 Protesters say even if legislator rejects Main Street’s priorities, he should host town hall meeting to listen to constituents

MIDLAND – As Michigan’s unemployment rate rises and many in Congress jump to protect millionaires over workers, Michigan nurses today expressed disappointment in U.S. Representative Dave Camp (R-Midland) for failing to support the Main Street Contract for the American People and called on him to hold a town hall meeting in the district.

“It’s hard to understand how a Congressman can choose to protect Wall Street and the wealthy while the workers and families he is supposed to serve continue to suffer,” said Michigan Nurses Association (MNA) President Jeff Breslin, R.N., who led a rally in St. Charles Park and march to Camp’s office.  “The nurses of Michigan, on behalf of the patients we serve every day, are fighting to fix the mixed-up priorities that allowed corporate greed to wreck our economy.  Dave Camp’s failure to respond to our request to pick Main Street over Wall Street shows he would rather help his fellow millionaires and corporate donors than protect services and create jobs for the folks here at home.”

MNA delivered a pledge sheet to Camp on Sept. 1, asking him to support the Main Street Contract. The campaign focuses on supporting priorities and policies that promote seven principles: jobs at living wages; guaranteed health care for all; a secure retirement, with the ability to retire in dignity; equal access to a quality education; good housing and protection from hunger; and a just taxation system where corporations and the wealthy pay their fair share. A minuscule tax on Wall Street transactions would fund investments in these priorities and rebuild America.

Since Camp has not responded to the nurses’ request, the nurses said facts about Camp will have to speak for themselves. As Chair of the House Ways and Means Committee, which handles tax policy, and a member of the Super Committee charged with resolving the nation’s $1.5 trillion deficit by Nov. 23, Camp holds tremendous power. Consider these facts:

Camp has voted for significant cuts to Medicare, which approximately 125,000 residents in his district – or nearly 1 in 5 – rely on for life-saving treatment and medications. Meanwhile, the night before the first meeting of the Super Committee, he was wined and dined at a fundraiser hosted for him by Pfizer – part of his pattern of accepting more than $4 million in donations from the financial, insurance, health and real estate industries that have benefited from his favoritism of corporations over middle-class families.

Although Camp is not holding public meetings at home to listen to residents’ concerns, he did make himself available on Aug. 31 to constituents – in Utah. Camp appeared with his buddy Sen. Orrin Hatch at an Economic Forum at Utah Valley University.

While Camp still welcomes checks rewarding his pro-corporate agenda, visitors seeking protections of vital services are another story. Fifty-four disability rights advocates in wheelchairs concerned about his support of Medicaid cuts were handcuffed and arrested when they went to talk to him at his Washington office on Sept. 19.

At a time when corporations are making record profits and many are using breaks bought through political donations to avoid paying their taxes, Camp wants to decrease the nation’s maximum tax rate for corporations by 10 percentage points.

While his own wealth holds steady at approximately $6.75 million, life for Camp’s constituents gets harder and harder. In the 4th Congressional District, nearly 80,000 people are uninsured, 25 percent of families are living with hunger, and about 20 percent of residents live in poverty. Michigan’s unemployment rate has increased for four months in a row, to 11.2 percent.

“It’s fitting that we’re out here in the wind and rain, because Michigan’s families are experiencing an economic storm every single day,” said Montie Schutz, a registered nurse who works at Central Michigan Community Hospital in Mt. Pleasant. “As nurses, we see the damage that our wrecked economy is doing to our patients and their families, from poor nutrition and lack of health care to unemployment and people having to live on the street. Congressman Camp may be a millionaire and not have to face these problems – but he should have to face those of us who are dealing with them. When Congress has a break in October, there’s no excuse for him not to have a town hall meeting. My neighbors and I deserve the chance to tell him our priorities and ask him when he’s going to start making corporations pay their fair share so we can invest in really rebuilding our state.”