Nurses, Robin Hood, Prepare to Converge on Chicago May 18 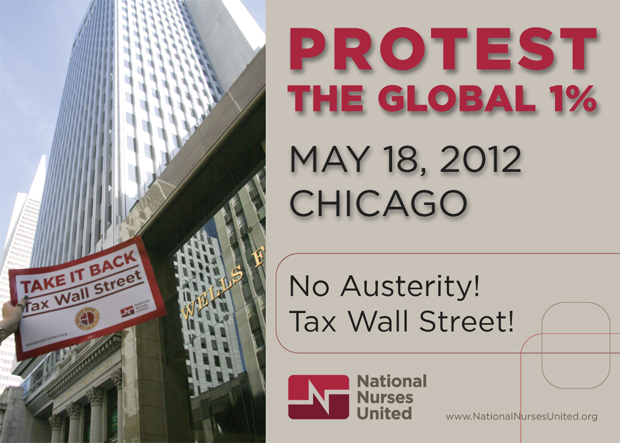 Nurses, Robin Hood and the band of merry women and men, and scores of friends are strapping on their boots and preparing to head to Chicago Friday, May 18.

The absence of AWOL G-8 leaders, who decided to run off and hide in the woods of rural Maryland rather than face a disgruntled public, has not dampened the spirits of Robin Hood and the nurses who will proceed with a colorful march through Chicago streets.

The march culminates in a Daley Plaza rally where Robin and the nurses will scour the brush and trees for the absent world leaders to determine what they are doing to help average families, not just the banks and Wall Street high rollers, in the midst of continuing economic gloom.

“Bailouts and bonuses for the banks, austerity for the rest of us, that’s been the prescription of the 1 percent and far too many among the G-8. No wonder they have run off to seclusion at Camp David,” said Karen Higgins, RN, co-president of National Nurses United, which is sponsoring the May 18 action.

“But they won’t be able to avoid the 99 percent for long if they don’t take meaningful action to heal the U.S. and global economies. A Robin Hood tax on Wall Street speculation and the gambling with people’s pensions, savings, and homes would be a good start. The tax can produce $350 billion or more every year for a national and global rebirth,” Higgins said.

More than 65 U.S. and international environmental, health, labor, faith, anti-poverty, and other organizations have endorsed the May 18 action in Chicago and its call for a small tax on Wall Street trades on stocks, bonds, derivatives and other financial instruments.

In addition, nurses and the Robin Hood marchers will call attention to the unwarranted pain of U.S. and global austerity measures while those who caused the 2008 economic collapse continue to party and profit.