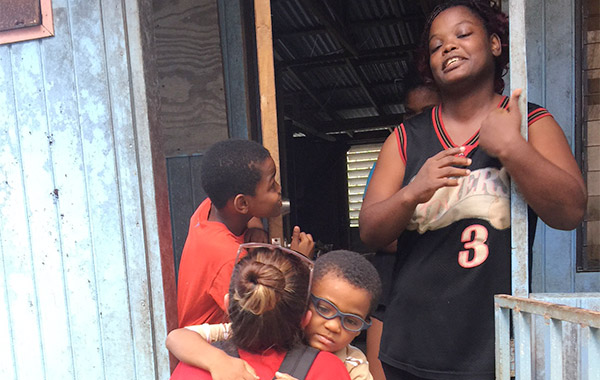 NNU’s Registered Nurse Relief Network (RNRN) sent 50 RNs as part of a 300-member deployment led by the AFL-CIO in conjunction with the Puerto Rican Federation of Labor and the San Juan Mayor’s office. They cite:

“What our nurses witness daily is the harsh reality of a woefully inadequate government response and the brutal, inhumane impact on the Puerto Rican people. People are still without food and drinking water. That poses an enormous humanitarian threat in terms of disease, life, and death and who succumbs first,” Castillo said.

“There can be no more delays. There is an extreme threat to life. The Trump Administration, FEMA, and Congress must act immediately,” Castillo said.

On the southern edge of San Juan municipality, where there has been no contact with FEMA, Red Cross or any official relief. This family has been sleeping in their roofless house on soaking wet furniture for weeks. The youngest child has (unsurprisingly) developed a rash. When RN Lucia Lopez gave the mother hydrocortisone cream, she burst into tears.

“Spent the day in Rio Grande, a hard hit area outside of San Juan. No power or water here since Maria. We set up a clinic at a FEMA site (their first time here). People lined up for blocks since 10 pm last night. But FEMA was only handing out papers! Papers, which need to be filled out in order that they might receive some reimbursement eventually. Each person received a small bottle of water, a mini bag of Cheeze-Its and a little pack of vanilla cookies. Outrageous. Meanwhile grocery stores have limited supplies and lines for many blocks. What amazes me is how kind, calm and sharing the Puerto Ricans are, sharing with and helping their friends, family and neighbors. We were able to provide care to some, not nearly enough, but one small contribution to this tragedy today. – Erin Carrera, RN

“Today we went to Corozal after meeting in the disaster command center this a.m. We set up a clinic at a school where families are living, and then the mayor drove us up a hill to do door-to-door assessments. Families were extremely relieved to see us. We are seeing a breakout of leptospirosis in the community here, at least three people have died and FEMA is not releasing water to the community. Yesterday, people stood in line since 10 p.m. the previous night in hopes FEMA would show up and give them food and water. To everyone's dismay FEMA showed up, but they were not there to get food or water, they were there to fill out paperwork. They handed one bottle of water and a snack pack of Cheez-It's.  I saw many patients yesterday; there were so many I lost count. It was really sad, however it's always amazing to see the spirit of the community. Neighbors are banding together to care for each other offering their last food to us not knowing if there will be any more food delivered to them.  -- Kent Savary, RN

"It's hell here. I fear this island will never recover. The people have nothing, yet they are first to offer you the shirt off their back." -- Laura Maceri RN

"We couldn't believe this is part of the United States. We did home visits in the low-income community today with the public health liaisons who identify those in need and help them do basic blood pressure checks, blood sugar checks, refill their meds, etc. They have already had chronic diseases going on and now their environment is full of hazardous materials and sanitation is so poor. They could not get a hold of their doctors due to closure of many clinics in the area. It's also hard to get prescriptions filled since they don't have money. We hope we can go further to the rural areas away from city where communications are cut off and people really can't get any help." -- Hau Cheng Yu, RN

RNRN volunteer nurses have cared for thousands of patients during disaster relief and humanitarian assistance deployments since the 2004 South Asian tsunami and Hurricanes Katrina and Rita. RNRN is powered by NNU, the largest union and professional association of registered nurses in the U.S.