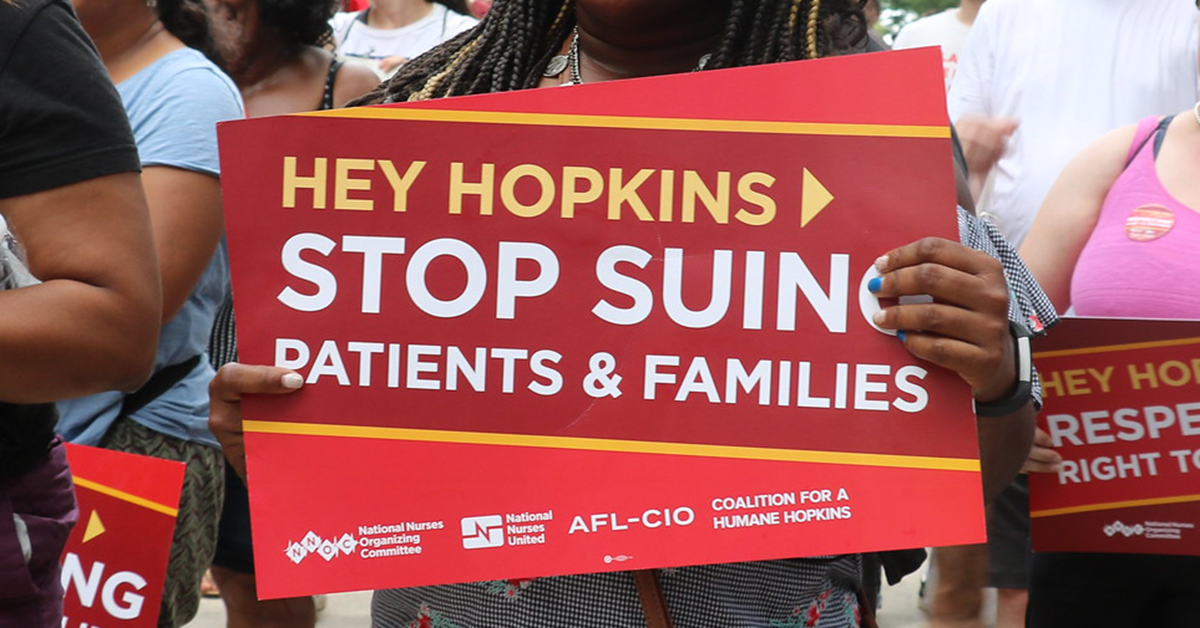 National Nurses United (NNU) today applauded the enactment of a Maryland bill that will provide new protections for patients facing the crisis of medical debt, a spiraling crisis for patients across the state and nationwide.

The Medical Debt Protection Act, a bill spearheaded by NNU with a broad coalition of Maryland activists, became law at the end of May when Gov. Larry Hogan allowed it to go into effect without his signature. It follows another important bill on hospital financial assistance reform, also championed by NNU, and passed into law by the Maryland legislature last year.

Among key provisions, the bill prohibits hospitals from lawsuits that would lead to a patient being arrested for medical debt, protects a patient’s home from medical debt lawsuits, and protects patients eligible for free or reduced cost care from wage garnishment and adverse credit reporting.

Ross praised the work of End Medical Debt Maryland, a coalition of over 59 unions, churches, consumer groups, and other organizations that worked with nurses to expose the crisis of medical debt in Maryland and press legislators to pass reform. NNU research highlighted more than 145,000 lawsuits against Maryland patients over a ten-year period.

Nationally, as many as a third of Americans are burdened with medical debt. Medical bills are a major cause of personal bankruptcies and basis for GoFundMe campaigns.

“Nurses know that the scandal of medical debt is linked to the emphasis of hospitals placing their profit margins and budget goals ahead of guaranteeing health care for their patients. This problem will only be finally eradicated when we eliminate the profit motive in health care through enactment of a system like an improved and expanded Medicare for all,” Ross said.

Efforts to enact reform in Maryland were encouraged by the findings of NNU research in 2019 with the AFL-CIO and the Coalition for a Humane Hopkins. It found that Johns Hopkins Hospital, despite its lofty reputation, carried an especially aggressive practice of suing patients for even minor medical debt. That study found that Hopkins had filed thousands of lawsuits against former patients, often without informing them of the options of reduced payments or charity care.

Hopkins’ practices, the report found, have had a disproportionate impact on African-American Baltimore residents. The area containing the largest number of residents sued by the hospital is 90 percent African-American and has a poverty rate nearly triple the state average.

Other provisions of the new state law:

National Nurses United is the largest and fastest-growing union and professional association of registered nurses, with more than 175,000 members nationwide.