Nurses on Nevada: Whereâ€™s the Outrage Over Widespread Irregularities That Occurred During Caucuses 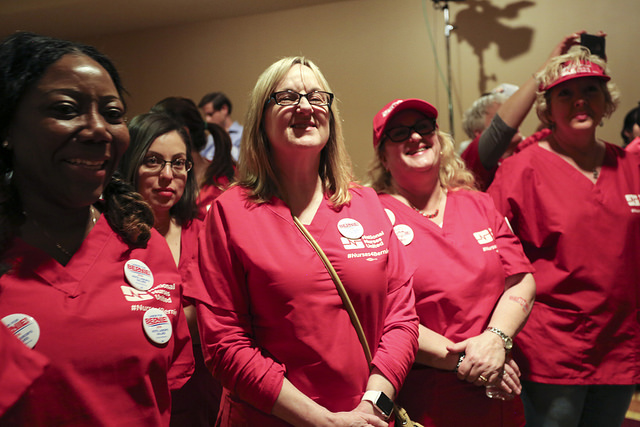 National Nurses United today criticized media coverage of the disputed Nevada state convention last weekend that has sought to distort events in Nevada while ignoring the original source of the dispute – massive irregularities in the conduct of the state caucuses in Nevada that tilted the outcome in favor of Hillary Clinton.

“Where was the media outrage we are witnessing now when there was blatant manipulation of the caucuses to engineer a win for Hillary Clinton in February? Where was the reporting then by the same media now so shocked that people remain angry over an unfair process?” asked NNU co-president Deborah Burger.

Just two days after the caucuses, veteran Nevada journalist Jon Ralston wrote that Nevada Sen. Harry Reid, the Senate Minority Leader, alarmed at the prospect of a Sanders win in Nevada “conspired to revive the Clinton campaign in a remarkable bit of backroom maneuvering” with, among others, Las Vegas Strip casino executives.

Subsequently, widespread improprieties occurred at numerous caucus sites that nurses and other supporters documented, including:

Management intimidation of voters. At a number of sites, casino directors and managers, who held sway over their locations where caucuses were held, decided who could get off work to attend the caucuses, herded Clinton supporters into the caucus meetings, and carefully monitored where they lined up and how they voted.

At the New York New York casino, for example, a man, wearing a Clinton campaign T-shirt who identified himself as “the director of this hotel” to a Sanders observer --  “the person who signs these workers’ paychecks” -- stood adjacent to the sign-in process, walked in and out of the caucus room, and conferred with other managers, in the area, remaining “clearly visible to the workers caucusing the entire time.”

Improper caucus registration. At several sites numerous people were allowed into the caucuses without registering, including people wearing Clinton shirts or buttons in some cases walked in by hotel managers, and even complaints of non-Nevada residents being allowed to caucus.

At Paris Las Vegas, where Burger was an observer, she said she witnessed "over 50 people allowed into the caucus room that had not registered and were told they would register after the caucus adjourned. I saw managers wearing Clinton shirts escorting workers into the caucus room and sitting with them to make sure they stayed where they were supposed to stay. When we raised objections, the caucus chair said he was doing it because the Nevada Democratic Party told him to allow them to be seated."

Long lines that distorted turnout. A number of workers who had limited time off for lunch breaks were not able to remain in lines that in some cases took up to two hours before the caucuses began. There were also reports of casino/hotel managers being selective about who was allowed to take work breaks to participate in the caucuses.

At Harrah’s Las Vegas, witnesses observed Clinton supporters tell caucusers wearing Sanders buttons that the registration line was “for Hillary supporters only.” When told that was occurring, the caucus chair took no action to stop it.

Disparate electioneering rules. At numerous sites Clinton supporters were permitted to openly campaign in the caucus sites and around the hotel while Sanders supporters were barred from engaging in their own support activity.

“At Caesars Palace, (Sanders supporters) were handing out information sheets but were stopped by (hotel) security to tell us we could not hand out the material because it was private property and if we didn’t leave it would be considered trespassing. On the other hand one of their employees showed us a Hillary caucus information sheet they were given by management to make sure they attended the caucus for Hillary.”

Participants in the Nevada state convention, having experienced a fairer process and correction in the results at the county conventions, arrived hoping to see a continuation of a more fair process. Instead, Sanders supporters noted, they were witness to more of the same, including a reversal of the county results. http://bit.ly/27x1gNV

“Our nurses who attended many of these caucuses were shocked and appalled at the behavior they witnessed,” said Burger.

“Going forward to Philadelphia and beyond, the Democratic Party must make it clear that it will not again sanction the type of corrupt process we witnessed in Nevada. You can’t let a wound fester,” said Burger.

She called on the DNC to “acknowledge it will not accept the chaos and slanted process that occurred in Nevada including open intimidation of voters and workers that constitute a clear denial of democracy. That’s a major component to being a more open and inclusive Party for all voters,” Burger said.