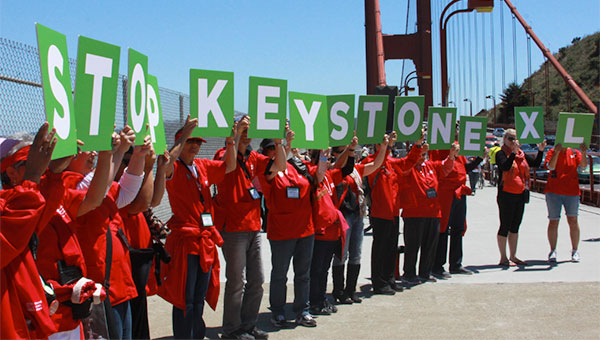 Nurses remain adamantly opposed to construction of the Keystone XL Pipeline, and will continue to speak out and join public protests against the project, warning of the consequences for public health and the acceleration of the damaging effects of the climate crisis, said National Nurses United today.

“President Trump’s green light for this dangerous project ignores a library full of the harm that is posed by the unwarranted project,” said NNU Co-President Jean Ross, RN. “In claiming Keystone is in the ‘national interest,’ the Administration is again turning truth on its head. What’s in the national interest is protecting our people from the adverse effects of the pipeline on human health, and the long term damage to our planet.”

“Approval of the project will not silence the opposition of First Nation activists, farmers, ranchers, and homeowners along the path of the pipeline, environmental and health care activists, and millions of other working people who are concerned about health and safety and the future of our planet. The fossil fuel industry may have disproportionate influence in Washington, but they will never stop dissent,” said Ross.

NNU also challenged the arguments for approval of Keystone. “The pipeline will do nothing to secure energy independence. The purpose of this pipeline is to facilitate transshipment of oil. The U.S. is now among the world’s largest fossil fuel exporters. This project only benefits the wealth and profits of the fossil fuel industry, and the politicians who are rewarded with financial support by them,” said Ross.

“The promise of jobs is also a fraud. The pipeline will only create 35 permanent jobs, unless you also count the jobs created to clean up all the toxic spills associated with pipeline accidents. Far more jobs are created by promoting clean renewable energy infrastructure and public works, including repair of our crumbling bridges, dams, schools, water systems, airports, and roads,” Ross continued.

For years, NNU has opposed Keystone, citing the impact of the extraction of the dirty tar sands oil, which has resulted in spikes of cancer, and other adverse health consequences in nearby communities, numerous spills from existing pipelines that pose a major toxic danger to water supplies, and the harmful health effects of the refining of the tar sands oil which has already resulted in higher emissions of pollutants that are directly linked to heart and lung disease and other health risks.

Ongoing pipeline accidents are a reminder of these threats, noted Ross.

A ruptured pipeline near Belfield, ND in December, 2016 dumped more than 176,000 gallons of crude oil, much of it into a tributary of the Little Missouri River about 150 miles west of sites where Standing Rock Sioux members and others spent months protesting construction of the Dakota Access Pipeline in which they warned of the threat to drinking water sources. The builder of the spill near Belfield is linked to a company that alone has reported three dozen spills since 2006.

In late January, an underground pipeline traversing multiple Midwestern states dumped 138,000 gallons of diesel fuel in Iowa. Another pipeline operated by the same company leaked anhydrous ammonia last October in an accident that killed one person and prompted evacuation of 23 households.

The year 2016 was a particularly troubling year for pipeline spills in the U.S., according to EcoWatch, which cited 220 incidents in 2016 alone. Over the past decade, the number of significant pipeline incidents, defined as those resulting in injury or fatality, have increased by 27 percent, reported EcoWatch citing data from the Hazardous Materials Safety Administration arm of the U.S. Department of Transportation.

The corrosive tar sands oil that is extracted, transported, and refined for the Keystone project is a major contributor to climate change. An assessment from the pre-Trump Administration Environmental Protection Agency found that well-to-well emissions from tar sands are 82 percent higher than for conventional oil.

The multiple effects of climate change are already abundant, notes NNU. They include year after year of the hottest years on record, super storms, melting ice caps that result in rising sea levels, life threatening droughts that also cause social upheaval and mass migrations, crop loss, and the spread of disease and epidemics.

“Senator Bernie Sanders was absolutely right when he said last year that climate change was the greatest threat to our nation and planet,” said Ross. “Approval of Keystone, following approval of the Dakota Access Pipeline and multiple other harmful pipeline projects now underway are a mortal threat. We have no choice but to resist.”