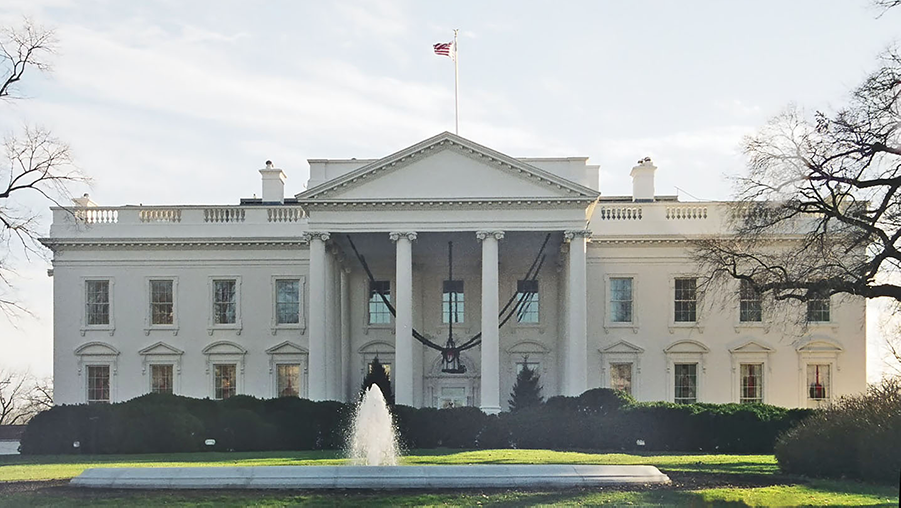 The Whitehouse - Image via Wikimedia Commons

National Nurses United (NNU) today endorsed the call by incoming Senate Majority Leader Chuck Schumer and many others calling for President Trump to be immediately removed from office through invocation of the 25th Amendment due to his role in leading the failed coup attempt that culminated in the assault by armed insurrectionists on the U.S. Capitol yesterday.

“No words can minimize the appalling attack witnessed by the entire world on the symbol of our democracy yesterday,” said NNU Executive Director Bonnie Castillo, RN. “Continuation of President Trump’s tenure presents a clear and present danger for a repetition of the failed coup or similar risks to our nation and the world. The risk of him remaining in office, even for just two weeks, is far too great.”

“If the 25th Amendment is not immediately invoked, the House must quickly begin impeachment proceedings and the Senate must convict Trump and remove him from office,” said NNU President Jean Ross, RN, endorsing a statement today from House Speaker Nancy Pelosi.

“There must be immediate and severe consequences when a president incites a violent insurrection against the United States in an attempt to stay in power against the wishes of the American people.  Congress must not shirk its responsibilities,” Ross said

“As nurses, we know that serious illnesses or injuries are a severe health risk and should not be ignored and permitted to fester and worsen. It is critical that we intervene and act to protect the health and survival of our democracy, to let the healing begin,” Ross added.

The next step, Castillo said, should be legal accountability for both the perpetrators of assault, “especially those who committed acts of violence in the Capitol, including those who engaged in pillaging and looting of Congressional offices.”

“We are also appalled by those who marched through the Capitol, without masks, posing an additional serious threat of spreading the Covid-19 virus to others, including our elected leaders, their staff, and all the employees who work in the Capitol and are now at risk of infection, hospitalization and death at the very moment the pandemic is at its record surge,” Castillo said.

Castillo also called for President Trump to be held directly accountable, by, in addition to being removed for office, to be tried for sedition.

“It was the President who inspired and mobilized the insurrection with his repeated delegitimization of a democratic election, virulent demonization of political opponents, and encouragement in a rally yesterday morning for disruption of the Congressional confirmation of President-elect Biden’s election.”

“Unless there is accountability for these crimes, going to the top, it will only encourage continued threats and acts of violence and the ongoing undermining of the legitimacy of our democratic institutions by those who engaged in the attack on our Capitol yesterday and those who fueled and led it,” Ross said.