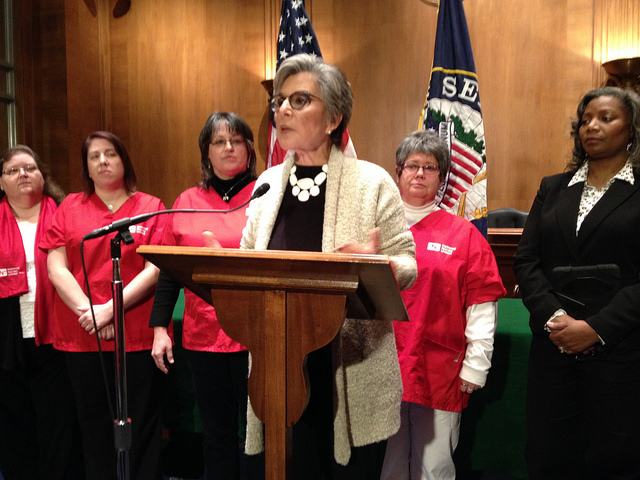 The nation’s largest U.S. organization of nurses today called on Secretary of State John Kerry and the Obama Administration to issue a finding that the Keystone XL “will not adversely impact the health and safety of the American people” prior to any final decision on the controversial project.

Leaders of National Nurses United sent the formal request today to Secretary of State Kerry, and issued the public letter in a Washington press conference convened by U.S. Senator Barbara Boxer who chairs the Senate Committee on Environment and Public Works. The NNU letter endorses a similar request made by Sen. Boxer and Sen. Sheldon Whitehouse.

In its letter, NNU said it concurs with Boxer and Whitehouse that the State Department has done inadequate review of what appears to be serious risks for public health posed by the pipeline and the dirty tar sands oil it would carry.

Noting  that the State Department must make a national interest determination on whether to approve the pipeline, NNU said that it believes that “a project that places the health and safety of Americans at substantial risk cannot possibly be in our national interest. “

NNU is inviting others to join them in petitioning the State Department to conduct a health impact study prior to acting on the pipeline. The nurses also released a new short video titled “Don’t Pipeline My Patients.” Both the petition and video are available on the NNU website, at www.nationalnursesunited.org/nokxl.

NNU announced its opposition to Keystone in early 2013, citing harmful health hazards then emerging with tar sands oil, tar sands pipeline spills, and tar sands refining, as well as for the long term contribution tar sands and Keystone add to the climate crisis.

“In the year since we first declared our opposition, more reports have surfaced that should raise serious alarm about the health impacts of Keystone,” said NNU Co-President Karen Higgins, RN today.

Tar sands refining has been linked to serious ailments of the nervous and respiratory systems. NNU is also concerned about toxic dust storms that have threatened neighborhoods and accumulated in homes and areas where children play in Chicago and Detroit, Higgins added.

NNU is also concerned about the long term contribution that tar sands oil and the Keystone pipeline will make to the global rise on greenhouse gas emissions and the climate crisis – and the growing adverse health issues inflamed by climate change.

Higher air temperatures can increase bacteria-related food poisoning, such as salmonella, and animal-borne diseases such as West Nile virus. Ground level ozone contaminants can damage lung tissue, reduce lung function, and increase respiratory ailments. Pediatricians have said they are already witnessing a rise in vector-borne diseases including diarrhea, cholera, gastroenteritis, typhoid, and hepatitis due to environmental factors and the effects of climate change.

For several years NNU has been dispatching teams of RN volunteers to provide disaster relief in response to weather disasters, such as Hurricanes Sandy and Katrina, and most recently Typhoon Haiyan in the Philippines, all of which many experts believe are fueled by climate change. “Our members have provided care for thousands of patients who have suffered serious injuries as well as the loss of family members, their homes, and their livelihoods,” Higgins noted.

“Nurses and our families are also affected by environmental pollution, and have much at stake if Keystone XL is given the green light,” Higgins concluded. “It is for our patients, our members, our families, and our communities that we speak out, and call on the Administration to order an immediate health impact study and not authorize a pipeline that will harm our planet and our health.”