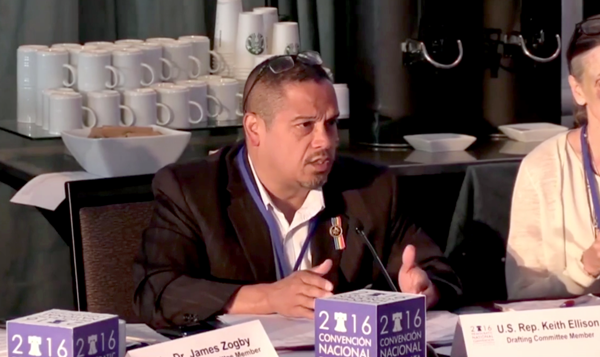 National Nurses United today condemned the vote of the Democratic Platform Drafting Committee meeting in St. Louis for its vote late Friday night to reject a proposal to place a commitment to “fighting for Medicare for all” in the party’s platform to be adopted at the Democratic convention next month.

The committee rejected the proposal submitted by Dr. James Zogby on a 7-6 vote. Joining Zogby, an appointee of Sen. Bernie Sanders to the committee, in voting for the proposal were the four other Sanders appointees, Dr. Cornel West, Rep. Keith Ellison, Deborah Parker, and Bill McKibben. Committee member Rep. Barbara Lee also voted for the single payer amendment.  All of former Secretary of State Hillary Clinton’s appointees voted against it.

“The committee has turned its back on tens of millions of Americans who continue to have no health coverage, or who are paying for health insurance they can not use because of the prohibitive out of pocket costs,” said NNU Executive Director RoseAnn DeMoro.

A subsequent platform motion to instead endorse the concept of health care “as a right,” said DeMoro, is “meaningless, little more than empty rhetoric, without a specific plan of how to make sure every American will have the guarantee of receiving the care they need, when and where they need it, without fear of going bankrupt or paying for care instead of other basics like housing or food.”

NNU will call on the full platform committee to pass a commitment to Medicare for all, and NNU delegates to the Democratic National Convention in Philadelphia will also fight for the language, she said.

In presenting the proposal, Zogby noted that the present health care system “is completely out of control” and that “the business of America should be caring for people.”

Ellison pointed out health care costs continue to rise because even with the Affordable Care Act, “we’re still tethered to the private insurance system” and “subject to whatever the private sector wants to do.”

West presented the sharpest critique of the committee vote, for trying to “sanitize and sterilize” what Sanders and his supporters pressed for – universal, guaranteed Medicare for all.

Even with the “breakthrough” of the ACA, said West, health care “is not a right, it’s still a privilege if 29 million fellow citizens do not have access to it. That’s what women were told in 1918 – voting rights are a right, but you don’t have it, sorry about that.”  When healthcare remains “market based” it’s not a universal right, West said.

DeMoro, who was also nominated to be a member of the drafting committee but was vetoed by the Democratic National Committee, did present oral and written testimony to the committee.

“It’s not good enough to blame Republican governors or the Supreme Court” for those who remain uninsured, said DeMoro in her written testimony. “Guaranteed healthcare for all must be a uniform, national obligation that the Democratic Party makes a priority, not a vague concept dependent on the vagaries of which states will pass Medicaid expansion.”

“We want a national health care system,” DeMoro said in oral testimony to the committee. “We would like the federal government to take responsibility to (paying) for all health care and take the private entities out of it. Here health care is a commodity. We have to have a commitment to provide the care people need and to not charge them for staying alive. That’s our role in society.”

DeMoro cited the recent Gallup poll showing 58 percent of Americans support Medicare for all, the very plan proposed by Sen. Sanders, and urged by NNU for decades.

“I’m asking the Democratic Party to go back to its roots, to find its commitment, and fight for Americans. While the ACA was an expansion, it’s not good enough. Premiums are going up, people are still having to ration their healthcare, people are afraid to use the system.