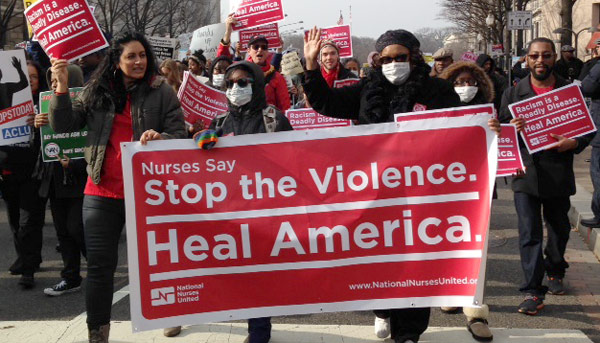 ‘Yet Another Case of Hospital Workplace Violence – Setting a Chilling Example When Done by Law Enforcement,’ Nurses Say

National Nurses United today criticized the actions of Salt Lake City police officers for assaulting and arresting a University of Utah registered nurse for advocating for an unconscious patient in late July.

In a press conference yesterday RN Alex Wubbels, released a video and described how she was assaulted and arrested and handcuffed by police, even after a hospital supervisor confirmed to the officers she was in full compliance with hospital policy for refusing to allow police to take a blood sample from an unconscious patient without his consent.

“The first job of a registered nurse is always to protect and advocate for her patient, period,” said Jean Ross, RN, co-president of National Nurses United, the nation’s largest union and professional association of RNs, calling the police actions “outrageous.”

“As the videos and news accounts make clear, there is no excuse for this assault, or her arrest, which sends a chilling message about the safety of nurses and the rights of patients,” Ross said.

“At a time of a growing problem of workplace violence against RNs and other hospital employees, it is especially appalling to see police assaulting an RN for properly, and legally, doing her job,” said Ross.  “It is particularly disgraceful to see violence in a hospital perpetrated by a law enforcement officer against a registered nurse who is advocating for her patient.”

According to news reports, the patient was a truck driver severely injured when rammed by a suspect fleeing a police chase. The police then came to the hospital demanding a blood sample from the injured, unconscious truck driver.

The videos show that Wubbels provided the police a print out of hospital policy clearly stating that a blood sample can not be taken without patient consent, a warrant, or if the patient is under arrest. Her hospital supervisor then confirmed the policy to police via a cell phone. The hospital policy has been affirmed by a U.S. Supreme Court ruling in 2016.

“Sir, you’re making a huge mistake because you’re threatening a nurse,” Wubbels’ supervisor is heard telling the police over the phone. The officer, Detective Jeff Payne, then tried to swat the phone out of Wubbels’ hand, roughly grabbed her, shoved her out of the building, handcuffed and arrested her.

NNU is sponsoring a national campaign to stem the growing epidemic of hospital workplace violence, charging all hospitals should maintain comprehensive programs emphasizing prevention and education, similar to a precedent setting law in California requiring prevention, now in force, that was sponsored by NNU affiliate, the California Nurses Association.

In a letter to NNU in January, outgoing Assistant Secretary of Labor David Michaels announced that the U.S. Department of Labor’s Occupational Safety and Health Administration (OSHA) granted an NNU petition calling for a national standard for a comprehensive workplace violence standard in healthcare.

“Workplace violence is a serious occupational hazard that presents a significant risk for healthcare and social assistance workers,” wrote Michaels.

OSHA would then be charged with creating the national standard, but no subsequent action has been taken under the Trump administration’s Department of Labor.