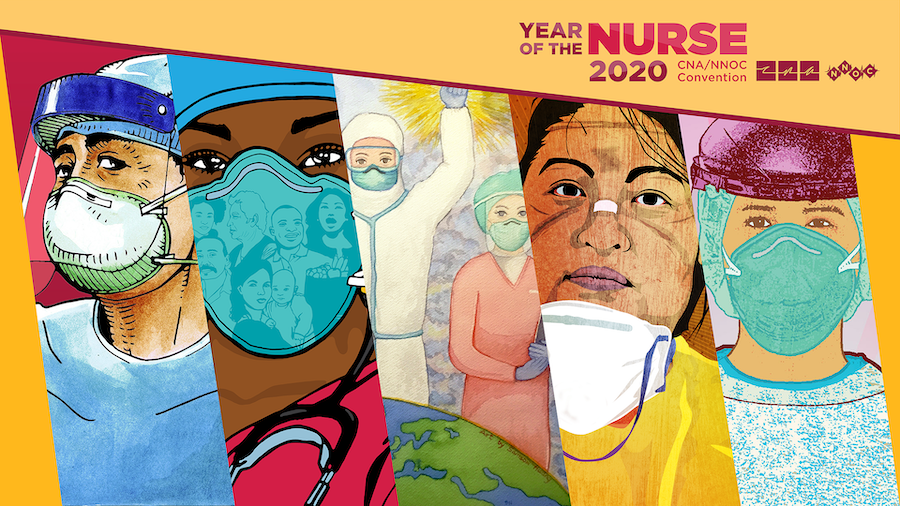 On the final day of their first ever virtual national convention, the more than 500 delegates to the California Nurses Association/National Nurses Organizing Committee (CNA/NNOC) Saturday issued a resounding call for transformative changes for racial, gender, workers’ and health care justice.

The RN delegates concluded a spirited four-day convention – the previous one was in 2017 – that also included strong commitments to step up mass mobilization on the tsunami of crises facing Americans in 2020, from the COVID-19 pandemic and police misconduct to the economic emergency faced by millions of families and the urgency of political change in November.

Speakers and delegates consistently emphasized how union strength increases when it is more closely aligned with the needs and priorities of their patients and their communities, as they work in unity for social and material justice as well as change.

Noting that 2020 was declared by the World Health Organization as the Year of the Nurse, Bonnie Castillo, RN, CNA/NNOC and NNU executive director, praised the role of nurses in their daily fight to save patients in a country where nearly 200,000 Americans have died, including more than 200 registered nurses.

Nurses have waged a long battle to keep the casualty count lower with minimal support from the Trump administration and most hospital employers, noted Castillo. “If COVID-19 has taught us anything,” Castillo continued, “it is that the path forward is through solidarity and collective action.”

The global breadth of the Year of the Nurse and the COVID-19 pandemic was also brought home in a presentation from Global Nurses United leaders who discussed how public pressure from nurses in Canada, South Korea, and New Zealand, was augmented by their countries’ national health care systems. This facilitated a more comprehensive response to the pandemic that resulted in only a tiny fraction of U.S. deaths in their respective countries.

Global solidarity was also present in recognition of the authoritarian moves by the Trump administration that parallel similar threats, and the footprint of U.S. policies in his closest antidemocratic allies in Brazil, India, and elsewhere.

The urgency of the moment was reflected in five expansive resolutions adopted by the convention delegates.

Defending Our Rights to Collective Action

Decades-long attacks on unions and workers’ rights, protections, and standards have accelerated under the Trump administration’s policies in collaboration with corporate interests, including health care corporations, with right-wing federal and state legislators and courts, the delegates noted.

CNA/NNOC pledged to continue to mobilize RNs, with labor and community allies, to oppose legislative and judicial assaults, such as anti-union “right to work” laws, and “emergency” measures proposed, from the federal government to states to corporations to override years of workplace protections and standards for RNs and other workers. CNA/NNOC also pledged to “redouble our efforts to organize nonunion RNs … to protect themselves, their patients, and their practice from the ravages of the corporate health care agenda.”

Health Care Justice in the Era of COVID-19

CNA/NNOC noted that the COVID-19 pandemic has exposed “the massive shortcomings of our fragmented, profit-based” health care system with millions losing their employer-funded health coverage and the health disparities in which Black, Latinx, and Indigenous patients have died at three to four times the rate of white patients, the convention resolution noted.

CNA/NNOC has long been at the forefront of the push for Medicare for All. The lack of a national system has greatly contributed to the “onerous challenges for mounting a coordinated and effective pandemic response,” the resolution stated, resulting in, among other consequences, “massive numbers of avoidable infections and deaths.”

Union delegates pledged to win national and state-based Medicare for All reform “through a registered nurse-led mobilization that seeks to rebuild our democracy through health care justice” in coalition with labor and community allies.

Medicare for All is also a “fundamental step toward addressing racial disparities and discrimination in health care, especially where racial disparities are directly related to ability to pay and structural racism in corporate and governmental practices,” the delegates declared.

The convention resolution on racial justice endorsed “systemic changes in policing practices from stronger de-escalation methods to limit use of lethal force, ending racial profiling, and greater independent public oversight and accountability” and “an end to the use of militarized force and weapons of war on people protesting racial injustice,” including the use of tear gas and rubber bullets.

It also called for “reversing the excessive increase in public spending on policing and prisons to reinvest” in public health, mental health services, public education, job and at-risk youth programs, and other social services; and an end to racist immigration policies.

In addition, the resolution endorsed reparations for Black Americans, affirmative action programs, full restoration of the Voting Rights Act, voting rights for the formerly incarcerated, statehood for the District of Columbia, and targeted economic programs to address the disproportionate racial impact of COVID-19.

A gender justice equity resolution brought together many of the convention’s themes, highlighting the union’s position at the forefront of efforts to build a strong multi-racial, feminist, gender-inclusive workers’ democracy from the bedside to the global arena.

Marking the centenary of ratification of women’s suffrage, the delegates noted that the 19th amendment left Black and other women of color disenfranchised due to racist discriminatory laws and practices. They pledged to work on increasing the voting rights of women of color as well as political representation for pro-labor women and candidates who advance feminist policies in political office and in leadership roles in unions and other venues.

The delegates resolved to work to reverse restrictions on women’s health services, including reproductive rights and health services, the Trump administration’s push to rescind Affordable Care Act nondiscrimination health rights for transgender patients, and cuts in nutrition programs that have a disproportionate impact on women, children and low-income families.

Further, the delegates called on legislative, legal, and collective bargaining efforts to end gender pay disparities; to improve family leave, unemployment insurance, and sick leave; and support full benefits to increase women’s autonomy as well as policies to end all forms of gender-based discrimination and violence.

CNA/NNOC delegates resolved to “vigorously oppose” an escalating corporate health care attack on patient care and nursing practice standards, including the use of technology to displace RN professional practice and ability to care for patients, attempts to “degrade RN staffing standards under the pretense of the COVID-19 crisis.”

They pledged to challenge employer harassment and retaliation against RNs who advocate for patients against the health care industry’s market-driven agenda.

Finally, the delegates resolved to work collectively “in our facilities and communities to protect our patients and the public’s health, locally and globally, in accordance with our organization values of caring, compassion, commitment, and courage.”

In her closing comments, retiring CNA/NNOC President Malinda Markowitz, RN saluted the breadth of her colleagues’ activism, stating, “Together we have built the most incredible union.”