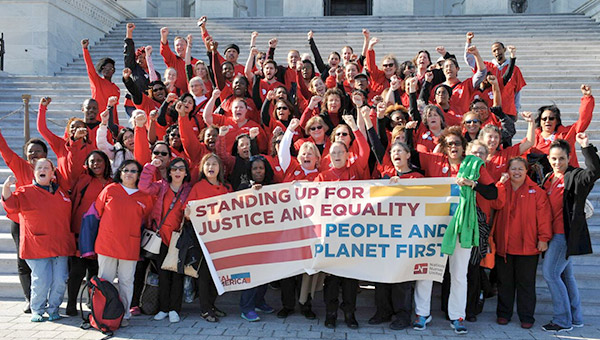 Taking Away Healthcare from Millions Not Way to Fix the ACA

National Nurses United today called on Senate Republicans to halt efforts to pass the secretive bill being rushed through Senate that could rip away health coverage for tens of millions and severely punish the sickest Americans with much higher out of pocket costs for health coverage.

“But what is even worse is the apparent content of legislation that is modeled on a cruel House version that even President Trump described as ‘mean’,” Ross said.

“While full details of the Senate version have been guarded under lock and key, what is apparent, noted Ross, “is that the hidden agenda of the legislation in the House bill, massive tax handouts to the richest Americans and corporate donors to those writing the law, remain intact.”

“The barbarity of ending Medicaid coverage for millions of low income adults coupled with a huge increase in costs for people with even minor so-called pre-existing health conditions, all while slashing taxes by up to nearly $800 billion for the wealthy and very wealthy will be long remembered by voters,” said Ross. “And we will help remind them.

“No one should ignore the deficiencies of the Affordable Care Act including leaving 28 million uninsured, and failing to control increasing out of pocket costs. But the response must not be this inhumane legislation. There is only one solution, not to deprive people of care, or bankrupt them for receiving the care they need, but by guaranteeing care for all by improving and expanding Medicare to cover everyone,” Ross said.

In addition to the multiple inequities in the House version of the bill, documented in a May Congressional Budget Office report, two recent studies indicate even broader consequences.

In a letter to House members April 27, Ross and NNU Co-President Deborah Burger, RN, cited other “abhorrent proposals” in the House version, many likely still in the Senate bill: