On a day in which members of National Nurses United (NNU) commemorated national nurses week with visits to multiple members of Congress, a large delegation of RNs called on Senate Finance Committee chair Sen. Orrin Hatch to reject the American Health Care Act (AHCA) passed by the House. They called for Sen. Hatch to instead support real reform, an improved and expanded Medicare for all.

NNU members, led by co-presidents RNs Deborah Burger and Jean Ross delivered a letter for Sen. Hatch to one of his aides, a health adviser, which called the AHCA “a mortal threat to the health and well-being of our patients, and to the health security of our country” that would result in the loss of existing health coverage for tens of millions of people without any restraints on healthcare industry pricing practices.

“This legislation will result in overwhelming health insecurity for the American people. On behalf of registered nurses across the country, we urge the rejection of this flawed, and deadly proposal.  We urge you to instead support guaranteed healthcare for all, through an improved, expanded Medicare for All program,” Burger and Ross said in the letter

Nurses, Ross told the Hatch staffer, “are urging him and other Senators to reject every aspect of that bill.”â€¨â€¨

Burger, adding the call for the real alternative, Medicare for all, noted that “our patients’ lives are at risk. We take care of patients every day who are dying because they can’t afford their cancer treatment, can’t take their chronic medications, or can’t afford their co-pays and premiums to get into the hospital for care.”

Fernando Losada, national collective bargaining director for NNU-affiliated National Nurses Organizing Committee, also criticized a statement made by Hatch Tuesday when he told a reporter, "The public wants every dime they can be given. Let's face it, once you get them on the dole, they'll take every dime they can.”

“That does not sound like a champion of healthcare when you call receiving health care ‘the dole’,” Losada told the aide.

NNU members also paid visits to numerous other Congress members urging them to oppose the AHCA, and support Medicare for all legislation, including HR 676, introduced by Rep. John Conyers which now has 108 co-sponsors in the House, a majority of the House Democratic Caucus, and a Medicare for all bill that will be introduced by Sen. Bernie Sanders. 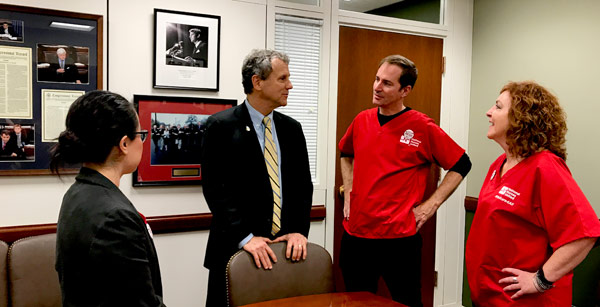 The RNs also called on legislators to support legislation introduced this week, S 1063 by Sen. Sherrod Brown (D-OH), and HR 2392 by Rep. Jan Schakowsky (D-IL), that would set specific safety limits on the numbers of patients each RN can care for in hospitals throughout the U.S.

“Studies have clearly shown that safe staffing saves lives, and we are proud to stand with Sen. Brown and Rep. Schakowsky who are standing up for patient safety with this critical legislation,” said Burger this week. “It is a travesty that 49 out of 50 states in the U.S. impose no legal limit on how many patients can be assigned to a nurse at one time in acute care hospitals.”