Nurses: California Needs to Do More on Protective Gear 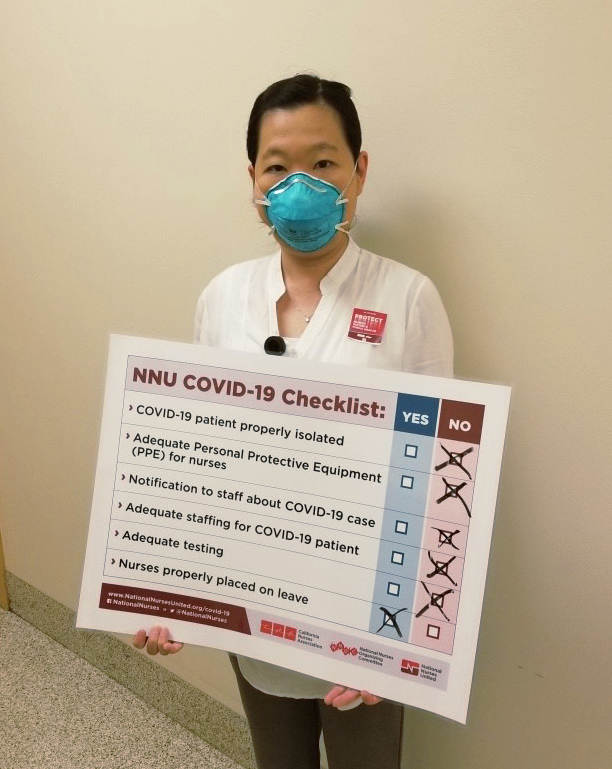 “While the Governor has taken some important steps, including the statewide stay-at-home order, and reopening two closed hospitals, we need to do far more, especially in producing proper personal protective equipment,” said Bonnie Castillo, RN, executive director of CNA and NNU.

“We hear from scores of nurses every day, across the U.S., and many of them in California. They still do not have access to proper protective masks, such as N95 respirators, and full head-to-toe protective clothing,” said Castillo.

To make matters worse, the California Department of Public Health, which has been underfunding public health budgets for a decade, yesterday informed California hospitals that it is waiving the state's current strong requirements on hospital safety.

This waiver will allow hospitals to sharply lower practices on a wide variety of standards, including personal protective equipment (PPEs) and even safe nurse staffing for patients (nursing ratios).

On PPEs, CDPH cites the much lower, non-mandatory, guidelines suggested by the Centers for Disease Control and Prevention that is allowing hospitals to use vastly inferior materials, such as bandanas, that provide almost no effective protection when patients are highly contagious.

“At a time when nurses are already being told to use makeshift, inferior coverings, see N95 respirators locked up, and even being disciplined when they bring in their own N95s, this is the worst message we can send to hospital employers,” Castillo noted.

“When nurses see that neither public officials, nor their hospitals, are putting much value on their safety, that is a prescription for even further disaster,” warns Castillo, “that will have tragic consequences and do nothing to stop an escalating disaster.”

California should be moving in exactly the opposite direction, said Castillo.

While President Trump has refused to use his authority under the just re-enacted 1950 Defense Production Act to order domestic manufacturers to mass produce personal protective equipment, as well as ventilators and other critical hospital supplies, states should take the steps they can, said Castillo.

New York Gov. Andrew Cuomo has said he will use state funding to pay businesses to mass produce protective equipment for health care workers. “Gov. Newsom should do that as well,” Castillo said.

NNU has surveyed more than 8,200 nurses from all U.S. states and territories. As of March 16, Just 55 percent report have access to N95 respirators, and only 27 percent have access to the highest standard, powered air-purifying respirators (PAPRs).

Only 24 percent say their employer has sufficient PPEs on stock to protect staff when the inevitable surge of COVID-19 patients occurs.