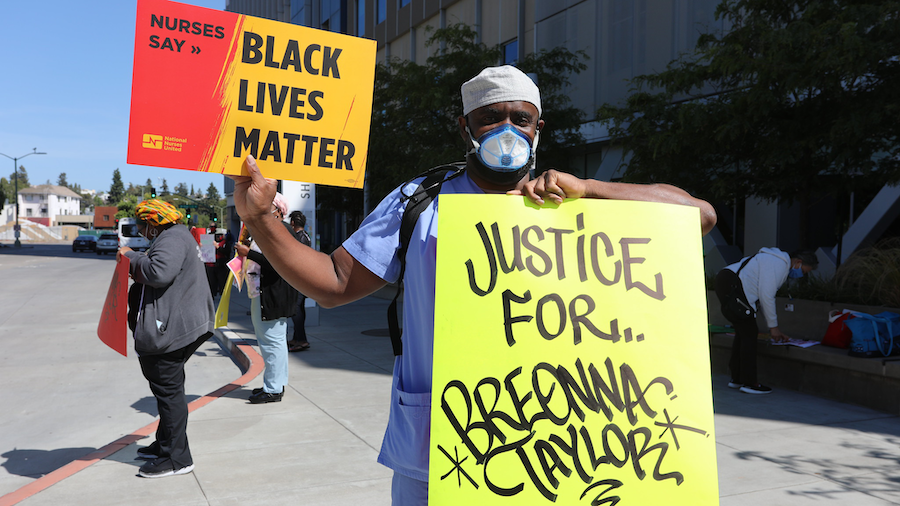 National Nurses United today joins those across the nation seeking social justice in deploring the failure of a Kentucky grand jury to hold Louisville police officers accountable for the death of Breonna Taylor who was shot and killed in a mistaken late-night raid in March.

“Once again, we see the failure of public authorities to act. Instead of commitment to justice, we see another unwarranted act of police violence justified and dismissed. This verdict is yet another reminder of the ongoing structural racism represented so often in policing practices that continue to stain our nation. It is long past time for it to end,” said NNU President Deborah Burger, RN.

“As nurses, as patient advocates dedicated to protecting health and safety and alleviating all human suffering, we know that until we dismantle structural racism and reimagine a society premised on social justice, no one in our communities, especially Black people who are disproportionately harmed by police violence and societal racism, will be able to achieve the optimal health we wish for them, and sometimes, simply to hold onto life.”

“Breonna Taylor’s murder is especially painful for nurses,” said Burger, noting that the young Black woman was a dedicated Emergency Medical Technician who worked in a local hospital, saving money to go back to school to become a nurse.

“Her commitment to providing therapeutic healing and care for her community, especially to medically underserved residents, makes this horrible decision even more disgraceful,” Burger said. “Her murder and this decision are a terrible blow to her family, her community, and all of us who believe that we need racial and social justice to begin to heal this nation. It is an untreated wound that should outrage us all.”

“Breonna should be alive today providing public service, not being another grim statistic of yet another Black person dying at the hands of an unjust, broken law enforcement system,” Burger said.

Instead of criminal charges against the two officers who shot Taylor, the grand jury merely leveled a low-level felony charge against a third officer for wanton endangerment for shots that hit a patio door and window of her apartment. That was a violation of department policy, during a midnight raid, that targeted the wrong apartment with a no-knock warrant.

Burger called that decision a signal that the property damage was “apparently of greater concern than the unwarranted killing of a young woman, hit with multiple gunshots and left with no medical attention for 20 minutes.” Burger added the NNU also joins with many across the country, including legislators and activists who call for a ban on no-knock warrants.

NNU, Burger said, concurs with the statement by the Movement for Black Lives who said that Breonna Taylor “deserved so much more. This indictment is another clear and egregious reminder that the criminal-legal system in Louisville – and in this country – does not value Black people or see us as deserving of protection from those who’ve taken an oath to ‘protect and serve’.”

Black people are three times more likely to be killed by police than white people, noted delegates in a resolution passed earlier this month at a convention of the California Nurses Association/National Nurses Organizing Committee, the largest NNU affiliate.

The resolution endorsed “comprehensive and systemic changes in policing practices, including stronger de-escalation methods to limit the use of lethal force, ending racial profiling, stronger disciplinary enforcement for misconduct, and greater independent public oversight and accountability.”

“We cannot be silent in the face of suffering and injustice. NNU will continue to speak out, encourage peaceful protest, and work for fundamental change, once and for all,” Burger concluded.